Flying can be stressful enough, so understanding NYC’s airport shuttles is a huge help. There aren’t any airports specifically in New York City, so you need to find a way to get from the airport to your accommodation. Fortunately, the transportation in NYC is pretty good, so you can get to your Manhattan hotel from JFK, LaGuardia, or even Newark Liberty International Airport in New Jersey.

If you’re going to be flying into NYC soon, I recommend you familiarize yourself with NYC’s airport buses and shuttles. It’ll save you a lot of stress in the long run!

In this guide, I’ll tell you how to get to Manhattan from the three airports around New York City: JFK, LaGuardia, and Newark. I’ll also tell you the best way to transfer between New York City’s airports, although the most convenient way is definitely to take the Airlink Shuttle or book a private transfer.

No matter which of the three airports you’re flying into, you’ll be able to get to Manhattan via one of NYC’s airport shuttles. You’ll also find other New York City transportation from the airport, like buses.

Shuttle from JFK to Manhattan

John F. Kennedy International Airport (JFK) is in Jamaica, Queens, and it’s the busiest airport, so it’s well-connected to Manhattan. Also, JFK has the AirTrain, which shuttles passengers from the airport to transportation hubs around Queens. The AirTrain is free unless you begin or end your route at Jamaica Station or Howard Station. In those cases, it costs $8, and you need to use a Metrocard. 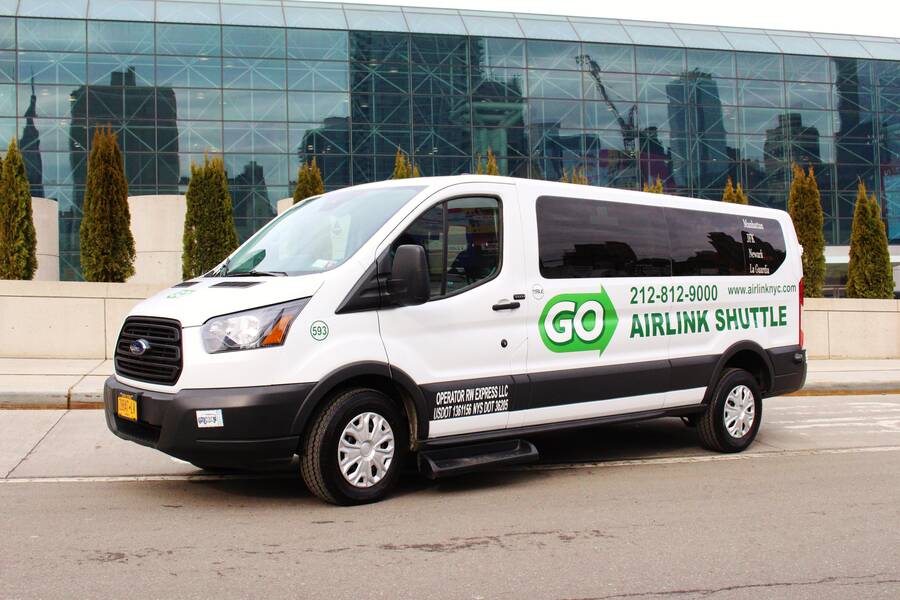 Shuttle from JFK to Manhattan

If you don’t want to navigate NYC’s subway system with your luggage, you can take a shared airport shuttle from JFK to NYC. The GO Airlink shuttle operates 24/7 and costs about $45 per person. The most convenient option is to book a private transfer here, and the price difference isn’t that big, especially if you’re traveling with someone else.

Newark Liberty International Airport (EWR) is in New Jersey, but it’s close to New York, so you can find connections and transfers to Manhattan. 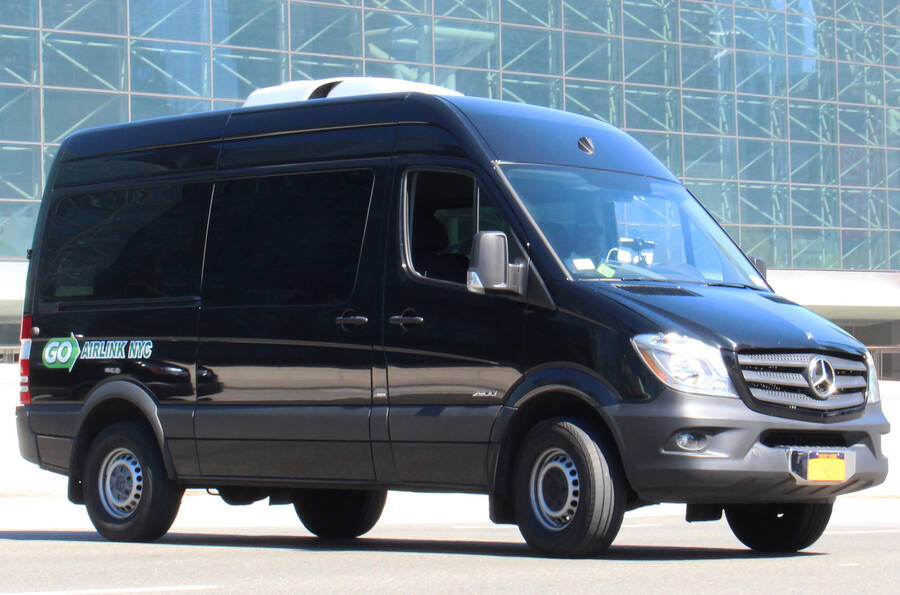 Like JFK, EWR has an AirTrain that you can take between terminals and to the Newark Airport Railroad Station. From there, you’ll find several trains going to Penn Station in Midtown Manhattan, like the Northeast Corridor train operated by NJ Transit. The trip takes about 45 minutes and costs $23.50 per person ($8 for the AirTrain and $15.50 for NJ Transit).

If you’d rather not take public transportation, you can take the shared GO Airlink airport shuttle from EWR to NYC for around $40 per person. Or you can book a private car service from the airport to New York City here. Again, this makes a lot of sense especially if you’re travelling as a group.

LaGuardia Airport (LGA) is in East Elmhurst, Queens, so it’s the closest airport to Manhattan. Currently, LGA doesn’t have an AirTrain, but there are plans to construct one in the future. 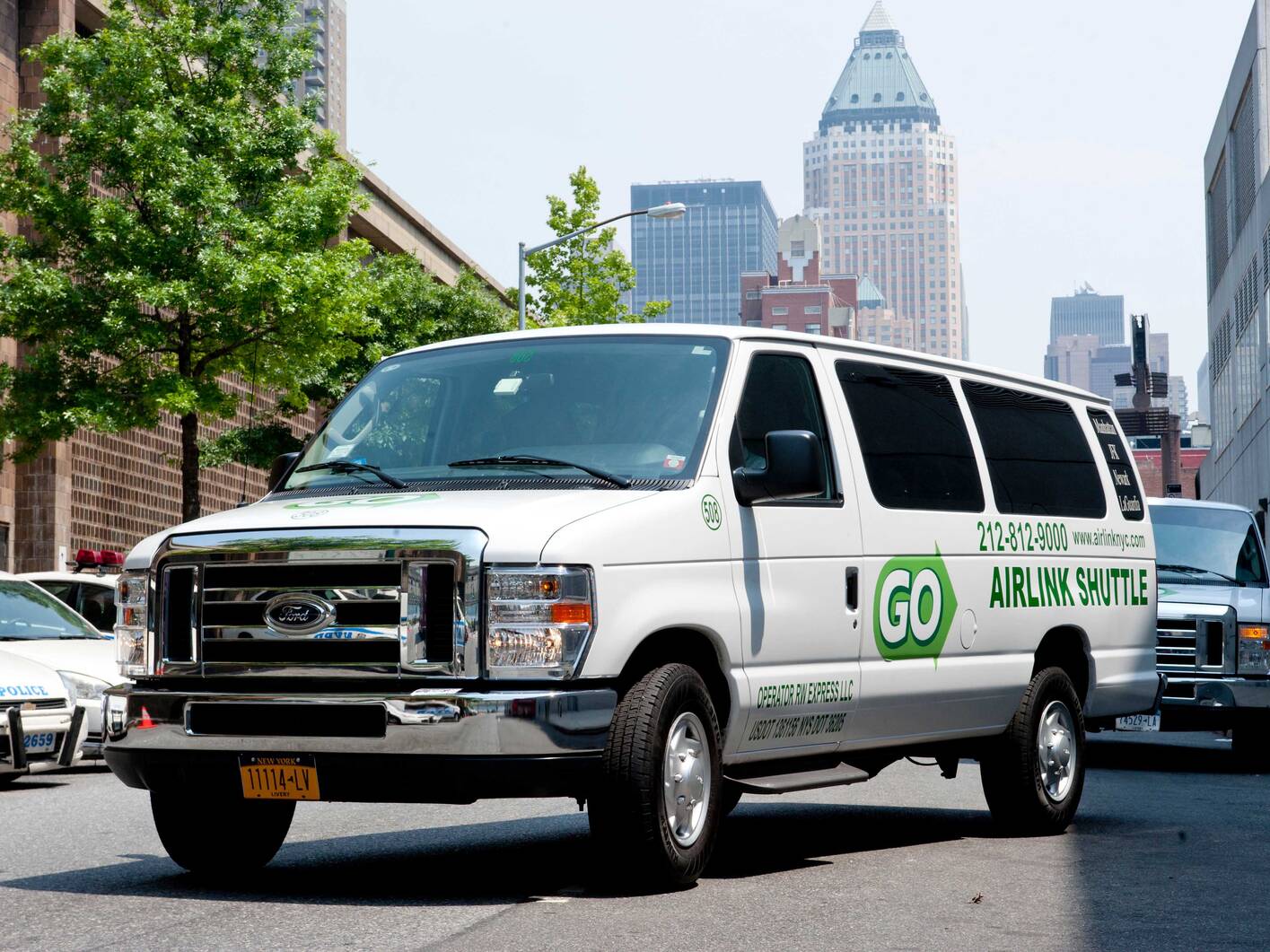 As an alternative, you can catch the M60 bus at the airport. If you get off at Hoyt Avenue and 31st Street, you can walk across the boulevard to the Astoria Boulevard subway station. From there, the W Train goes to 34th Street – Herald Square in Midtown. The trip costs $5.50 ($2.75 for the bus and $2.75 for the subway).

Again, shared GO Airlink shuttles are available at LGA, for about $40 per person. If you prefer private transportation from LaGuardia to Manhattan, you can book it here.

Transferring between airports is annoying, so I recommend you avoid it if you can. However, sometimes this is unavoidable, especially if you got a cheap flight. Fortunately, there are shuttles that can make New York City airport transfers less of a headache.

If you’re flying into JFK and need to catch a connecting flight at EWR, hop on the AirTrain and take it to Jamaica Station. From there, board the Port Jefferson Branch train and ride it to Pennsylvania Station. You’ll have to make another transfer there to the Northeast Corridor train, which you’ll ride to the Newark Airport Railroad Station. That’s where you can catch the AirTrain to the EWR Airport. 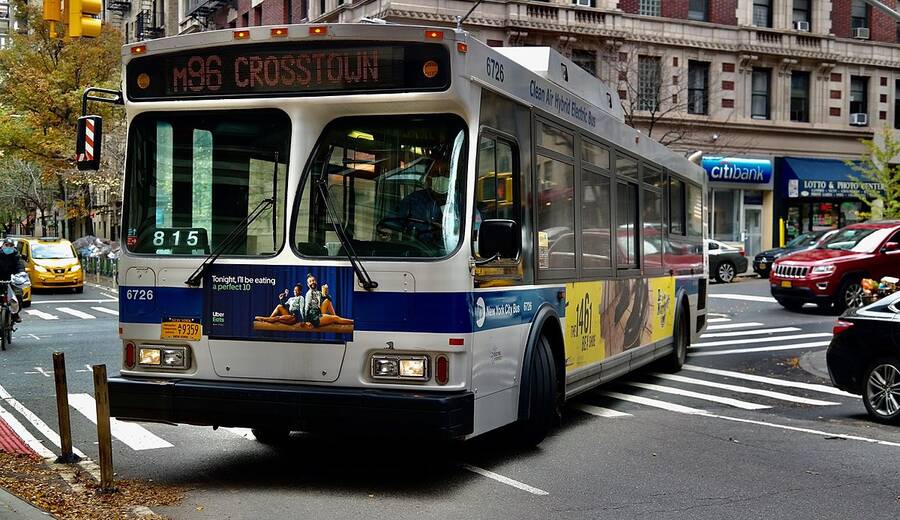 You can reverse the trip if you’re flying into EWR and need to get to JFK. Take the AirTrain to the Newark Airport Railroad Station and hop on the North Jersey Coast Line. Ride that to Pennsylvania Station and transfer to the Babylon Branch train. Take that to Jamaica Station, where you can get on the AirTrain to JFK. The journey costs $30.75 and takes about 1.5 hours.

ETS Airport Shuttle has a fleet of vans and shuttles that can transport you between airports. A shared shuttle costs about $52 per person, and the entire ride lasts about 1.5 hours. If you prefer a private shuttle from JFK to EWR or vice versa, you can set up a transfer here. This will be the cheapest and most convenient option if you’re traveling as a group.

To get from LaGuardia to JFK, take the Q70 bus from LGA Airport and get off at Roosevelt Avenue and 74th Street. Walk across the street to the Jackson Heights – Roosevelt Avenue subway station and get on the E Train. Ride that to the Sutphin Blvd – Archer Avenue – JFK Airport stop, then walk over to Jamaica Station, where you can hop on the AirTrain towards JFK Airport. This route takes about an hour and costs $13.50. 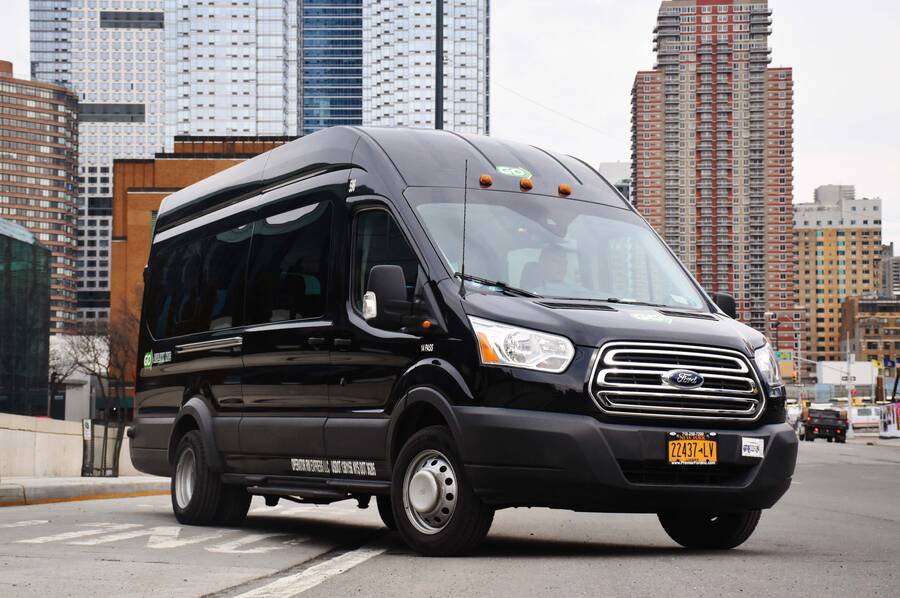 When you’re flying into Newark Airport and have to get to LaGuardia, you can take the AirTrain to the AirTrain Newark Railroad Station. From there, hop on the Northeast Corridor train and take it to Pennsylvania Station. Then, take the Port Jefferson Branch train to Woodside and walk across the street to the Roosevelt Avenue/61st Street bus stop. Wait for the Q70 bus and then take it to LGA. The journey costs $29 and takes about 1.5 hours. 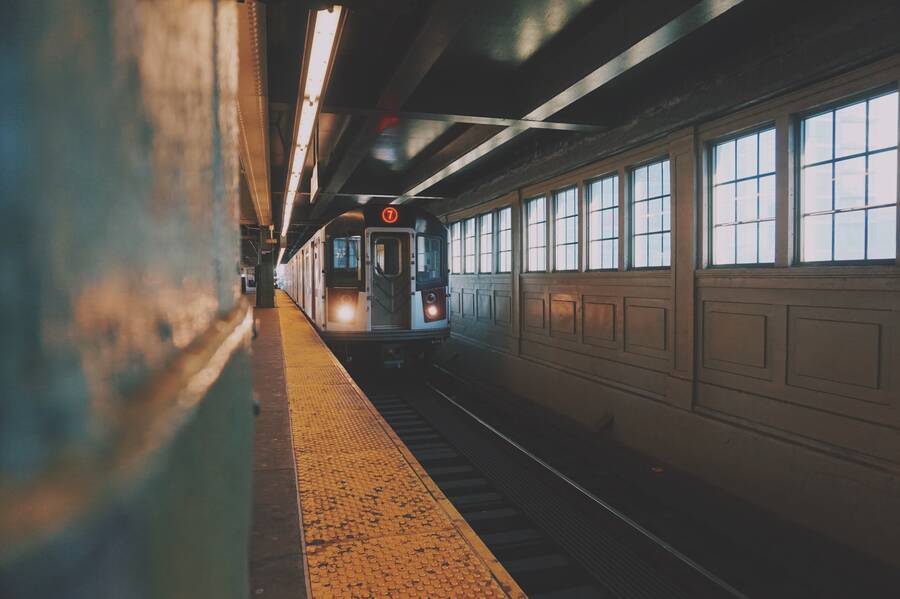 To go from LGA to EWR, catch the Q70 bus from LaGuardia Airport and take it to Roosevelt Avenue and 74th Street. Then, walk over to the Jackson Heights – Roosevelt Avenue subway station, where you can take the E Train to 42nd Street – Port Authority Bus Terminal. Hop on the 112 bus, then get off at North & Dowd Avenues. From there, walk to US-1 & 9 at North Avenue and take the 62 bus to EWR.

You can get from EWR to LGA via a shared shuttle with ETS Airport Shuttle for around $52 per person. If you’d rather take a direct airport shuttle to EWR, book it here. This is the cheapest and most convenient option if you’re traveling with a group.

Here are some common questions you may have about airport shuttles in NYC:

How do I get from the airport to my hotel in NYC?

You can take the AirTrain airport shuttle from JFK, LGA, or EWR and transfer to the city’s buses or subways, depending on where your hotel is. You can also book a private transfer for a more direct ride. Some hotels in NYC have airport shuttle service, but these hotels are usually outside of Manhattan.

How much is a shuttle from JFK to Manhattan?

A shared airport shuttle from JFK to NYC starts at $45 per person.

Is there a shuttle between NYC’s airports?

Yes, and you can set up a New York City airport transfer with ETS here.

How much is a shuttle from LGA to Manhattan?

A shared airport shuttle from LaGuardia to NYC starts at $40 per person.

How much is a shuttle from Newark to Manhattan?

A shared airport shuttle from Newark to NYC starts at $40 per person.

That’s everything from me! To sum up, the Airlink Shuttle is my top recommendation for getting to and from New York City’s airports. Of course, I also suggest checking our guides on where to stay in New York City and our tourist maps of NYC to find a great accommodation and plan your trip.

If you have any other questions or concerns about NYC’s airport shuttles, feel free to leave me a comment. I’d be happy to help you out. Until then, have a wonderful trip! 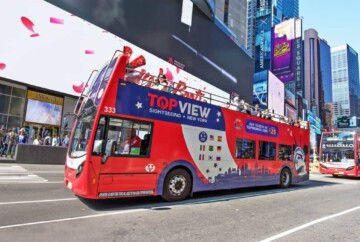 NYC Transportation Guide | How to Get Around NYC 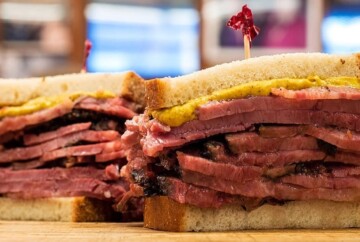 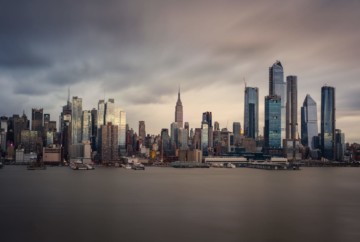