Seattle is known for rainy weather and the Space Needle, but there is a lot more to this city than meets the eye. As a hub for Pacific-Northwest nature, urbanization, and counterculture, Seattle isn’t without its weird side. One of the best ways to experience the city is by taking Bill Speidel underground tour.

The underground tour in Seattle is one of the most popular activities today, but the history behind it goes back to 1889 when a great fire ravaged the city. After the destruction, the city had to undergo complete reconstruction, and, as a result, the former streets now sit beneath the modern downtown district.

When I first came to Seattle, I wanted to see the vast landscape and majestic mountains nearby. Yet, when I learned that there is a whole other side to this city, I was intrigued.

You’ll start at an 1890s saloon before embarking on a journey through the decrepit tunnels and passageways. Along the way, you’ll learn about the previous glory of old Seattle and visit the sites of former shops, houses, and pubs. The tour is equal parts eerie and entertaining, and something you don’t want to miss!

I’m glad I experienced this part of the city, and to help you plan your trip, I’ve this guide with everything you need to know about exploring underground Seattle.

The history of the Underground Tour in Seattle, WA

The passageways you’ll traverse during the Seattle underground tour were once at ground level back in the mid-1800s.

On June 6, 1889, a young man tripped over a glue pot in a carpentry shop, igniting the Great Seattle Fire, which burned through the entire central downtown district. In less than a day, the blaze destroyed 25 city blocks. 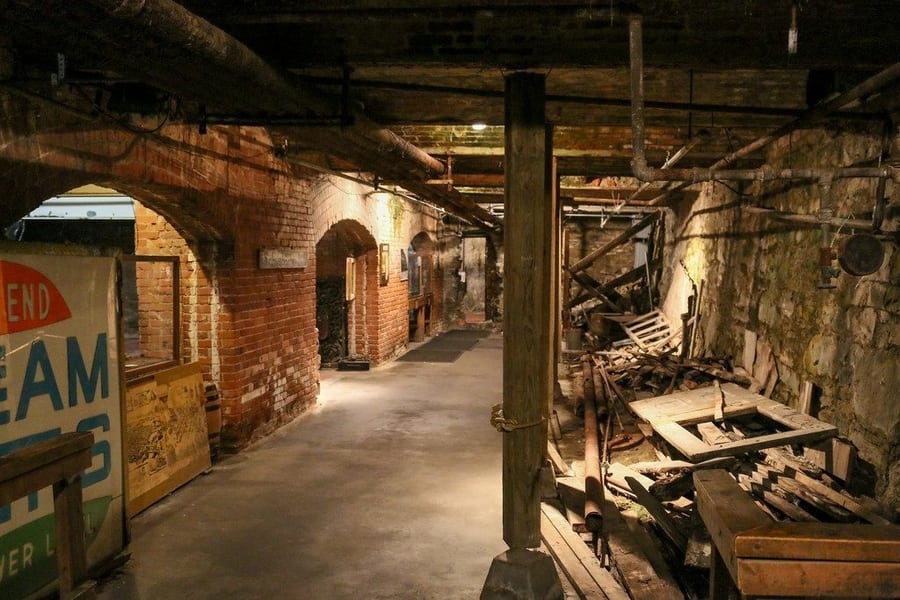 The history of the Underground Tour in Seattle, WA

However, the Seattle residents were steadfast in their commitment to rebuild. Work began almost immediately to reconstruct the city center, right on top of the burnt remains. Today, the buildings in Pioneer Square sit 20 feet above the 1880s underground city of Seattle.

Of course, the former streets and alleyways fell into disuse and remained underground, nearly forgotten. In the 1960s, a Seattle Times columnist named Bill Speidel reignited interest in this area. After receiving a reader question about the underground ruins of Pioneer Square, Speidel began guiding people through the tunnels. From there, the tour grew and became one of the most unique attractions in Seattle. Now, anyone can take an underground tour of Seattle‘s old ruins!

What will you see on Bill Speidel’s Underground City Tour?

The underground tour of Seattle starts in Pioneer Square. While today, the neighborhood makes up the southwest section of downtown Seattle, in the mid-1800s, it was the city center.

There are now several Seattle underground city tours, including the Bill Speidel underground tour, which begins on 1st Avenue, near Cherry Street.

Throughout the tour, you’ll travel beneath Doc Maynard’s Public House and wind through the eerie passageways under Pioneer Square. The tour covers several ruinous blocks full of abandoned storefronts and remnants from the past, like old furniture and cutlery. 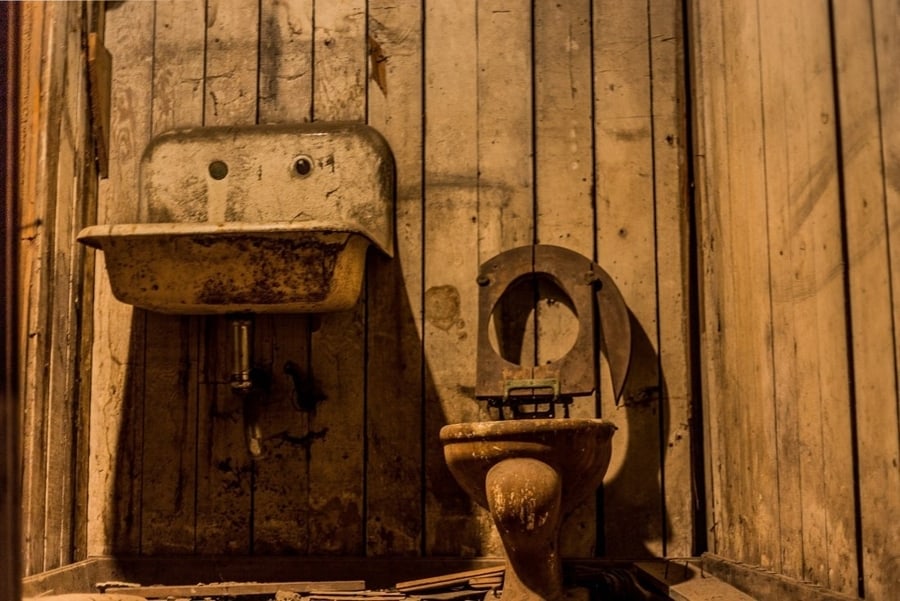 What will you see on Bill Speidel’s Underground City Tour?

The guide will take you above-ground a couple of times, stopping at some historic structures before descending back underground. For example, you’ll stop at the Howard Building, which was one of the first major buildings in Pioneer Square.

You’ll also learn about the Klondike Gold Rush, the indigenous Coast Salish population, and Skid Row, where the city’s working-class lived and congregated. While some people consider this to be a haunted Seattle underground tour, the ambiance is quite lighthearted and humorous.

As you continue your journey, you’ll see the ladders that residents used to traverse the underground and the new, elevated city streets, as well as the purple-glass pavement lights. You can also see restored artifacts that were salvaged from the 1889 wreckage, such as old machinery and public baths.

The Seattle underground history tour lasts anywhere from 60 to 90 minutes.

Also, the underground tour in Seattle will go on rain or shine, so dress accordingly!

The Seattle underground tour tickets are affordable, yet the costs can add up for families. Kids under 6 are free, although they might not enjoy this type of tour.

I think the price is worth it, especially if you want to know more about Seattle’s underground tunnels. I really enjoy the tour we took, and our guide was super helpful and willing to share with us so many interesting facts about the underground Seattle. 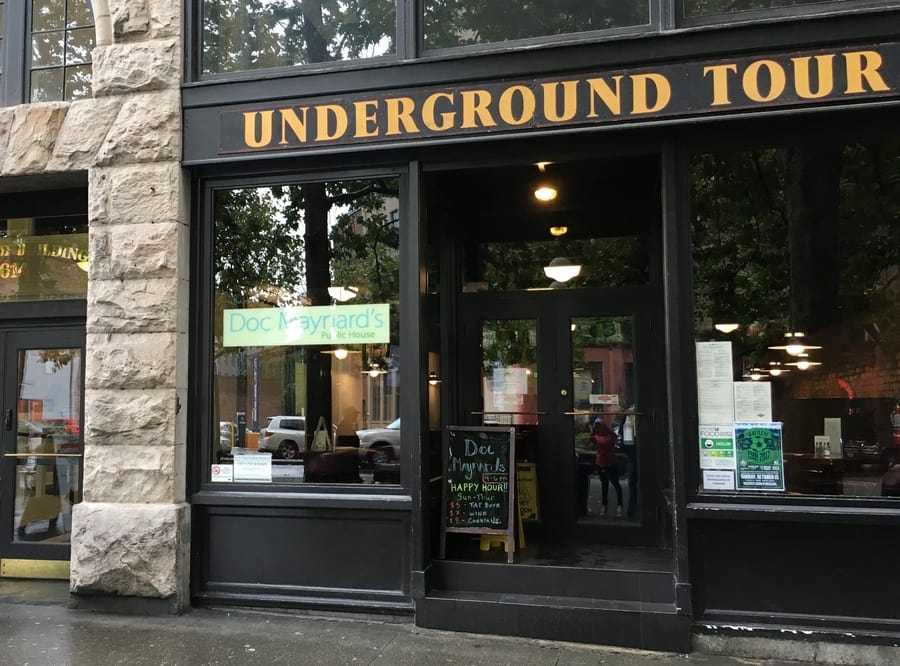 Please consider that this is a very popular tour, so I recommend purchasing your Seattle underground history tour tickets in advance since your preferred time might sell out.

Who is Bill Speidel?

While you’re researching the best Seattle underground tours, you’re sure to come across the name Bill Speidel. So, I think it’s a good idea to give you some background history of this influential man.

Bill Speidel was a columnist for the Seattle Times. While he joined the paper in the late 1930s, his most notable work didn’t appear until the 1960s. In addition to his newspaper columns, he also wrote two books in 1967 and 1978. Most of his work focused on the history of Seattle’s early settlers. 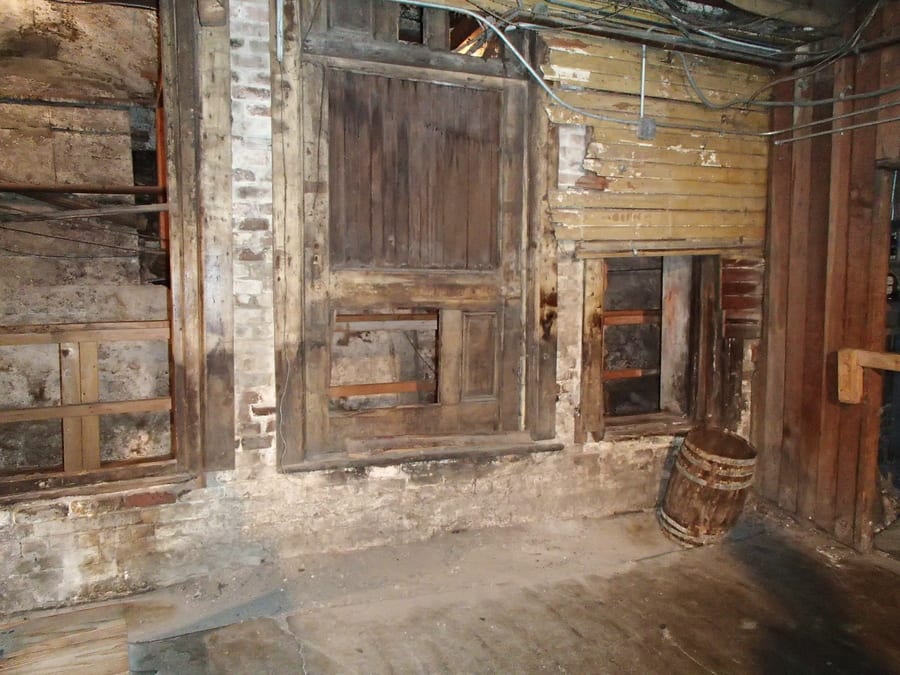 Who is Bill Speidel?

Speidel was passionate about preserving the city’s history, especially Pioneer Square, which was quite rundown in his days. When a Seattle Times reader asked about the underground remnants of the square, it piqued Speidel’s interest. He investigated the area and then invited the reader to come and see what he found.

Well, that reader ended up bringing along 500 friends. Word spread about this unique walking tour of Seattle’s underground, and more residents followed Speidel into these previously unexplored depths of the city. He began collecting a $1 fee from each visitor, and the rest is history.

Today, the Bill Speidel Underground Tour is one of the weirdest and most popular ways to learn about Seattle’s history.

Still not sure about exploring the underground in Seattle, WA? Here is some more information to help you decide and plan your trip.

Is the Seattle Underground tour worth it?

Yes! This is a very different tour of Seattle that you won’t be able to experience anywhere else. Not only do you get to learn about the Seattle underground tunnels, but you can walk through some of the remains.

How much is the Underground Tour in Seattle?

While the cost depends on the tour company, most Seattle Washington underground city tours are $30. The Bill Speidel Underground Tour is about $30, but that doesn’t include tips.

Is it necessary to book the Underground Tour in Seattle?

You can have a great time here without doing a Seattle Underground City Tour. However, if you want to learn more about Seattle’s underground history, this tour is a must-do.

Where can I book the Underground Tour in Seattle?

You can book the Bill Speidel Underground Tour here.

Is there parking for people who are going to do the Bill Speidel Underground Tour?

There isn’t a designated parking lot for the Seattle underground tour. Instead, visitors should take public transportation since the bus and light rail stops at Pioneer Square LINK station.

Can you eat or drink during the Underground Tour in Seattle?

You can bring a covered drink with you, but food isn’t permitted during the Seattle underground history tour. The tours start near Doc Maynard’s Public House, and many visitors stop there before or after their tour.

That’s everything you need to know about exploring the underground city in Seattle. If you have any other concerns, or you want to share your experience, leave me a comment below and I’ll get back to you! 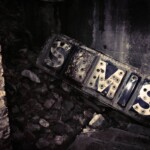 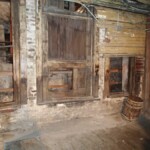 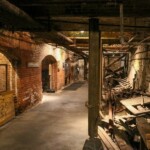 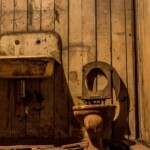 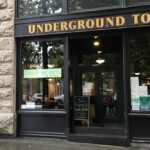