If you’re taking a summer vacation around NYC or you just want to have a fun day out, check out one of the best amusement parks in New York. There are several amazing amusements park in NYC, as well as historic theme parks scattered across New York state.

Some of these NY theme parks are even open in the spring and fall, so there are plenty of opportunities to have a fun day out. Whether you’re looking for breathtaking thrill rides or the happy-go-lucky feeling of carnival games and family attractions, you’ll find it at the best New York amusement parks.

You may prefer to stay close to Manhattan and visit the amusement parks on Coney Island, or maybe you’ll venture off the beaten path and check out the popular theme parks on Long Island. There are even more parks further north, so you’re never far from a great time.

In this guide, I’ll share the 8 best amusement parks in NYC and New York state. Keep reading to see where the top theme parks are located and what makes them stand out!

Visiting Coney Island is one of the best things to do in NYC, and it’s also home to two of the greatest amusement parks in New York City. First, Luna Park is a reimagined replica of the original 1903 Luna Park, and it even includes some of the rides and attractions from that first theme park.

For example, kids can still ride the B&B Carousel, while thrill-seekers can zoom down the historic Cyclone, the most famous roller coaster in New York City. All in all, Luna Park features three dozen attractions, including rides for the kids and an arcade. It’s open seven days a week during the summer season, and if you visit on Fridays, you can see the weekly fireworks show. You can get a ticket to Luna Park ahead of time here.

Another amusement park in Coney Island, New York is right next to Luna Park. Deno’s Wonder Wheel Amusement Park is a family-owned attraction that first opened in 1920 with its famous Wonder Wheel, a 150-foot-tall Ferris wheel with stationary and traveling cabins.

Today, the Wonder Wheel stands proudly next to a variety of family and kiddie rides, like a carousel, haunted house ride, and bumper cars. Without a doubt, it’s one of the best places to go in NYC with kids. Its newest attraction, the Phoenix roller coaster, is popular with adults and older kids, so there’s something for everyone here.

2. Playland Park, the best amusement park near NYC for kids

Playland Park is one of the best kiddie amusement parks in New York, so if you have young children, don’t miss it. At nearly 100 years old, this theme park is a National Historic Landmark and boasts a unique Art Deco influence.

2. Playland Park, the best amusement park near NYC for kids

Here, the kids can enjoy all the attractions at the park’s Kiddyland section, which includes kiddie coasters, a Grand Carousel from 1915, and games. There are other family rides and large coasters here, as well as an arcade, a boating lake, and a waterpark.

Not only that, but Playland Park hosts live entertainment, shows, and fireworks during the summer season. It’s located along Long Island Sound, and if you take public transportation, you can get discounted admission tickets. Overall, it’s an awesome amusement park in Rye, New York that you don’t have to travel too far to enjoy.

3. Adventureland, one of the best amusement parks near NYC

Adventureland is another fun amusement park in New York, this one in East Farmingdale, NY. It’s another Long Island theme park that attracts families and kids, thanks to its variety of thrill rides, family attractions, and kid-friendly amusements.

3. Adventureland, one of the best amusement parks near NYC

Along with its roller coasters and water rides, Adventureland features an arcade and all kinds of midway games where the kids can win prizes to take home. There are several restaurants and snack stalls, as well as a food court, so you can easily spend the whole day here.

Moreover, this amusement park in Long Island, New York, is just 30 minutes from Manhattan, so it’s easy to get to.

Seabreeze Amusement Park has a lot to offer, from its variety of attractions to the cool breeze coming off nearby Lake Ontario. This amusement park in Rochester, New York opened in 1879, making it the fourth-oldest operating amusement park in the U.S. 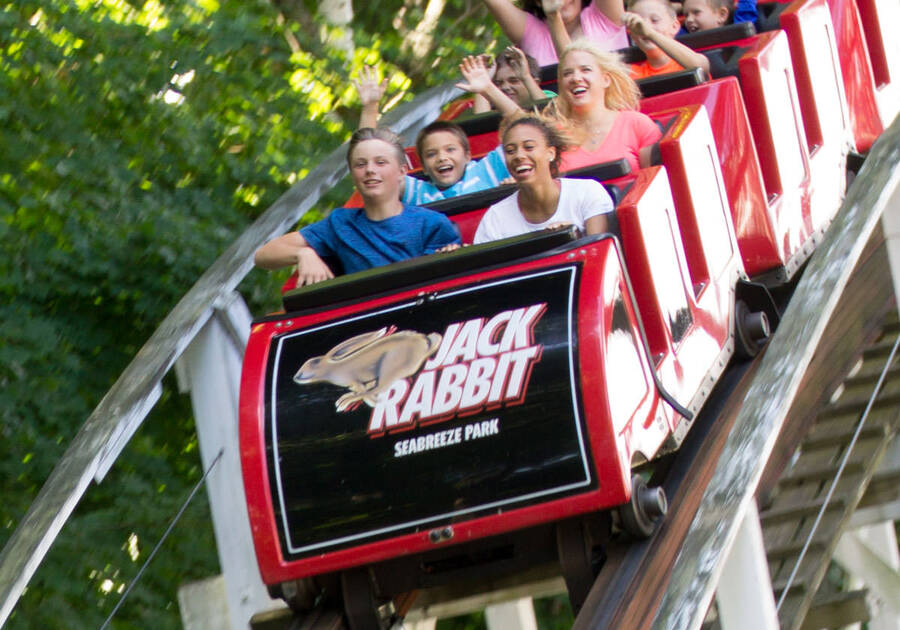 To this day, Seabreeze is still a popular summertime destination, boasting an amusement park, a waterpark, live shows, and scenic picnicking spots. If you’re looking for a thrill, be sure to ride The Jack Rabbit, the second-oldest operating wooden roller coaster in the country. It reaches a maximum speed of 42 mph and has a 75-foot drop.

If that’s too much for you, Seabreeze also has family rides, an arcade with midway games like Skee-Ball, and a carousel museum. There are plenty of kiddie rides for the children, and a Cirque En Vol circus show that will delight all ages. This New York amusement park is open daily during the summer season, so be sure to check it out if you’re in the area.

5. Six Flags Darien Lake, one of the top theme parks in NY

If you’re looking for an amusement park near Buffalo, New York, I recommend Six Flags Darien Lake. This large theme park is in Corfu, NY, and includes an amusement park, waterpark, and campground for RVs and tents.

Along with a wide range of thrill and family rides, there are eight roller coasters and a children’s section with kiddie rides. Parents and kids will enjoy the live performances, and the park regularly hosts large concerts at its outdoor performing arts center.

5. Six Flags Darien Lake, one of the top theme parks in NY

As I mentioned, Six Flags Darien Lake has water attractions at Hurricane Harbor, one of the best waterparks in NYC. That said, you can also visit the amusement park on weekends in October for Fright Fest, or during the holiday season for the Magic of Lights Christmas display.

6. Adventurer’s Amusement Park, one of the best amusement parks in NYC for families

6. Adventurer’s Amusement Park, one of the best amusement parks in NYC for families

While it’s a smaller amusement park in Brooklyn, New York, this entertainment complex is a great place to visit with young kids since there are lots of kiddie rides. You can easily spend hours here riding the Ferris wheel, carousel, bumper cars, kiddie coaster, and other attractions.

Adventurer’s is open daily in the summer, so you’ll have no problem adding it to your itinerary. Plus, you won’t be far from Manhattan, so it’s the perfect kiddie amusement park in New York if you’re staying overnight.

Legoland New York is one of the newest theme parks in New York, and the perfect place for kids and Lego enthusiasts. Located about two hours from NYC in Goshen, Legoland is one of the most imaginative attractions for the young and the young at heart.

The park consists of seven themed areas where kids can meet life-sized Lego characters, like Brickbeard the Pirate. They’ll also delight in the mini Lego replicas of cities and landmarks, including NYC and the Statue of Liberty. In total, there are about 30 million Lego bricks throughout the park, which is best suited for kids up to age 12.

While it’s a pricier park, there are loads of attractions here, from family rides and kiddie coasters to 4D and live-action shows. Along with restaurants, cafes, and food carts, there is a Legoland Hotel and Halloween and Christmas events, so you can even visit once summer is over.

If you want to visit New York’s Legoland amusement park, you can get your ticket here. Also, the park is included in the New York Pass, so if you plan on visiting other attractions during your trip to the Big City, consider getting a New York citypass.

Finally, Fantasy Forest Amusement Park is another historic amusement park in NYC, specifically in Queens. It’s in Flushing Meadows-Corona Park, one of the best parks in NYC.

Admission to Fantasy Forest is free, and even though it’s a smaller park, it’s lots of fun. Enjoy playing all kinds of midway and carnival games, watching live shows and performances, and riding your favorite kid-friendly attractions, like the Flushing Meadows Carousel.

This amusement park in Queens, New York is open for birthdays and group events, and parking is free, so it’s a wonderful place to treat the kids to a special day.

That’s it from me! I hope you found a New York amusement park you’d like to visit during your next trip. To give you a better idea of where each park is, here is a map of the New York theme parks I mentioned.

If you have any other questions, feel free to leave me a comment and I’ll do my best to help you out. Have a fun day out!