If you’re visiting some of the North American National Parks, it’s very common to wonder how frequent bear attacks are in Canada and the United States, how to avoid them and how to behave if an encounter or attack happens. 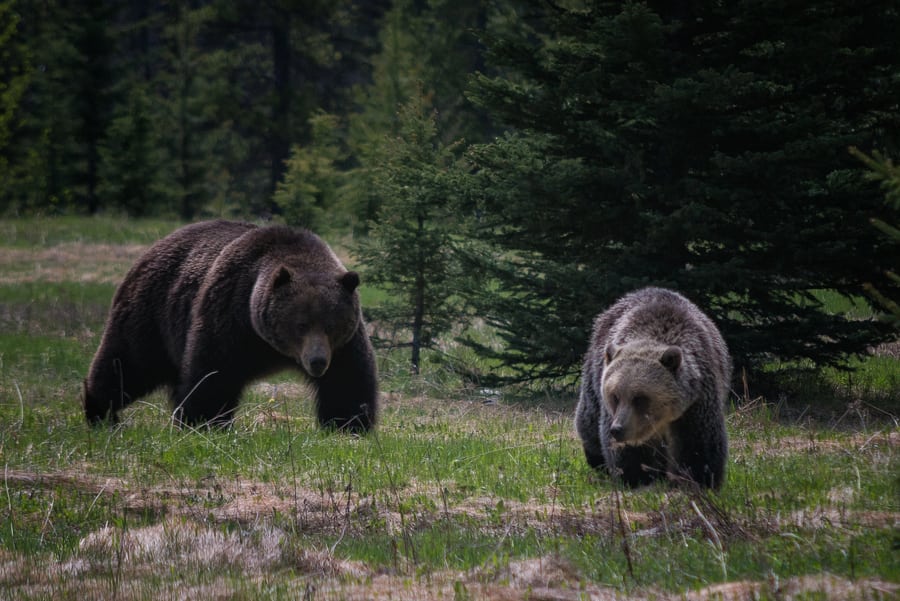 Grizzly bears – The boss and his daughter

I’ll admit that I was a bit scared about this when planning our Canadian Rockies road trip because our plan was to camp and hike in the middle of nature. The first thing I would ask you is to check here what travel insurance I recommend, since, although having a scare with a bear is not usual, it is always better to be forewarned. Remember that it is better to buy budget travel insurance than to travel with no insurance at all.

5% OFF your travel insurance

with COVID-19 coverage
ONLY UNTIL NOVEMBER 28TH
GET IT HERE!

However, the stats say that only 2 to 5 people die every year from bear attacks in Canada and the United States. It is much more likely that you’d die from an illness or a traffic accident instead of being mauled by a bear.

Still, if you are traveling to the West Coast of Canada or to the United States National Parks like Yosemite, Yellowstone or Alaska, I recommend that you study up on how to avoid bear encounters and how you should act during a bear attack.

It is important to learn the following:

In short, in this guide, we have put together all the information you need to know to avoid and survive a bear attack.

There are three types of bears in North America: Polar bears, brown bears, and black bears. Polar bears are only found in some areas of Alaska and Canada.

In this article, we will focus on the species of bears that you’ll be most likely to see: grizzly bears and black bears. Their behaviors are quite different so the first thing you have to do is to learn how to tell the difference between them as soon as you see them.

The Grizzly bear is a brown bear variant that lives in North America. It is considered the most aggressive bear in the world, even compared to other brown bears. 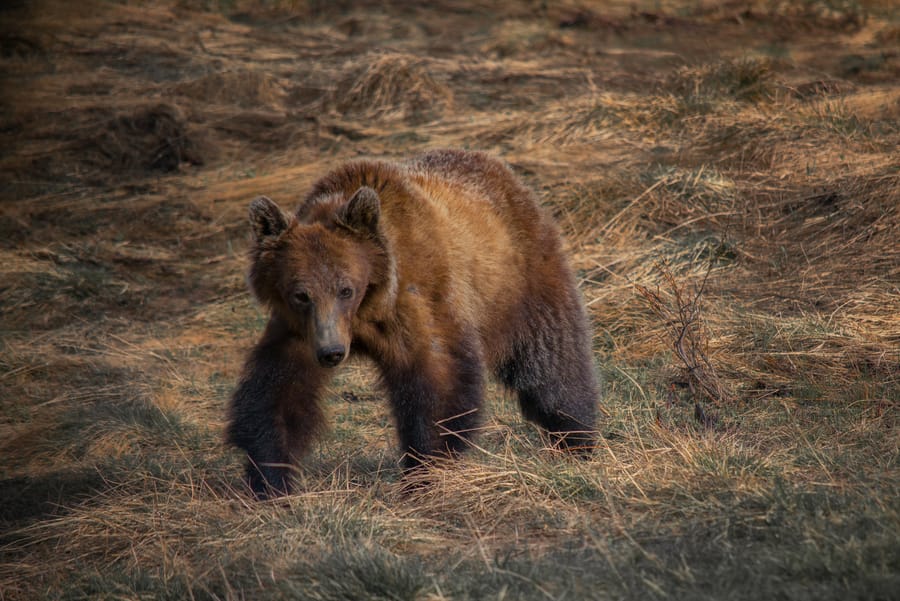 The black bear, or American black bear, is the most abundant bear species on the planet. Although at first they might look harmless, you should know that in some situations, they could attack and be dangerous. 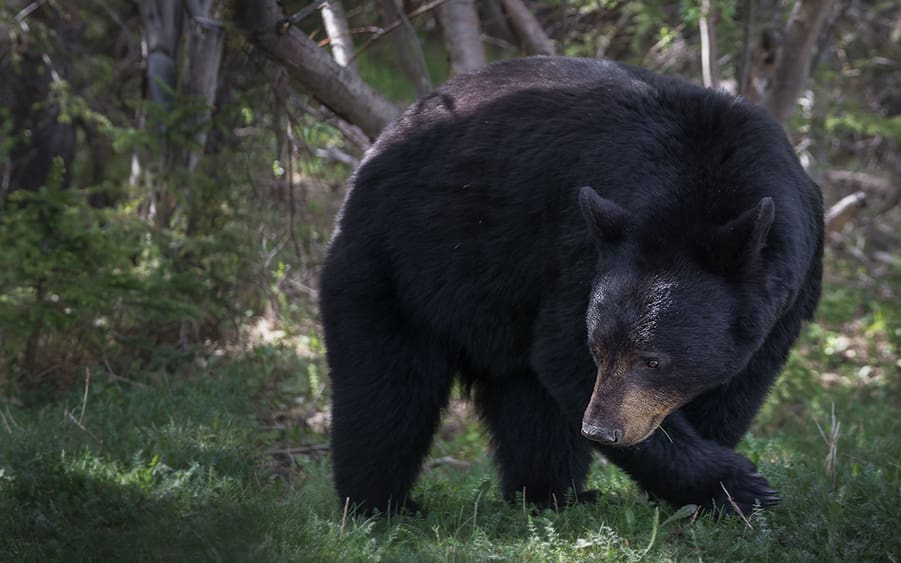 WHERE WE CAN FIND GRIZZLY BEARS AND BLACK BEARS

We can find grizzly bears in Canada (in the Yukon, Northwest Territories, British Columbia, and Alberta) and in the United States (in Alaska, Montana, and Northwest Wyoming).

The habitat of the black bear is more extensive. We can find them across Canada, the United States, and Mexico.

This bear is found in all Canadian territories and in 39 of the 50 U.S. states, both on the Atlantic and Pacific coasts.

Size is not a useful physical characteristic for differentiating black bears from grizzly bears since they have similar sizes. 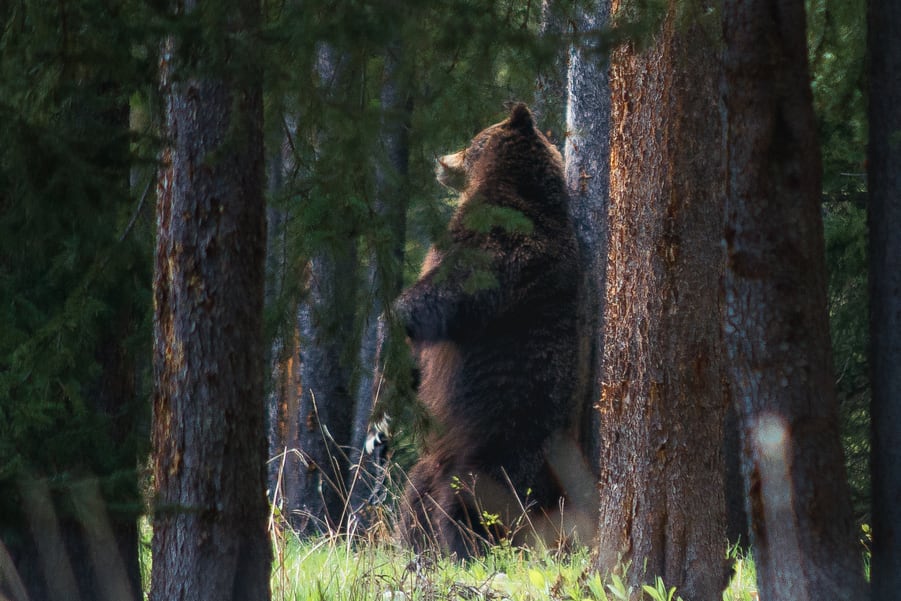 Color is also not a useful physical characteristic for differentiating black bears from grizzly bears since they can have similar colors. 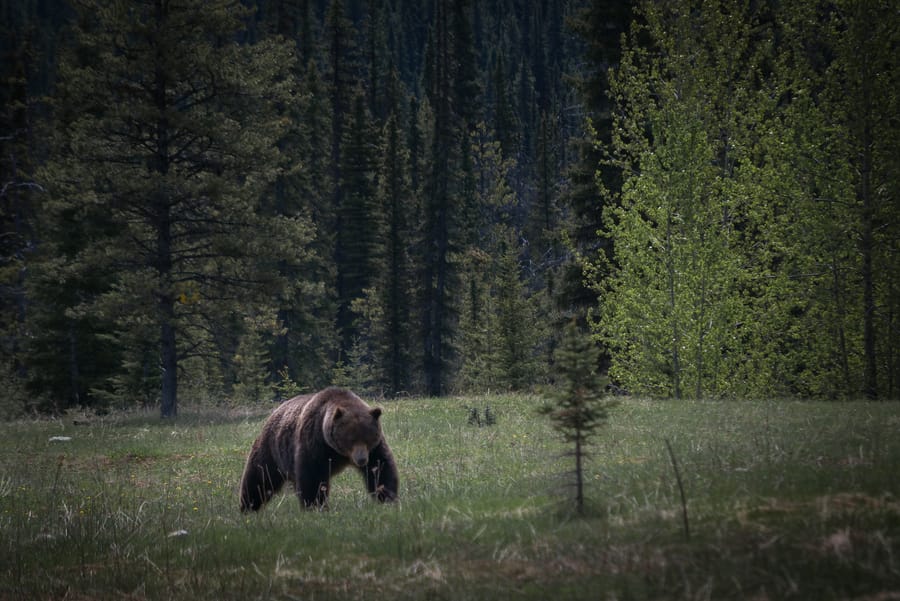 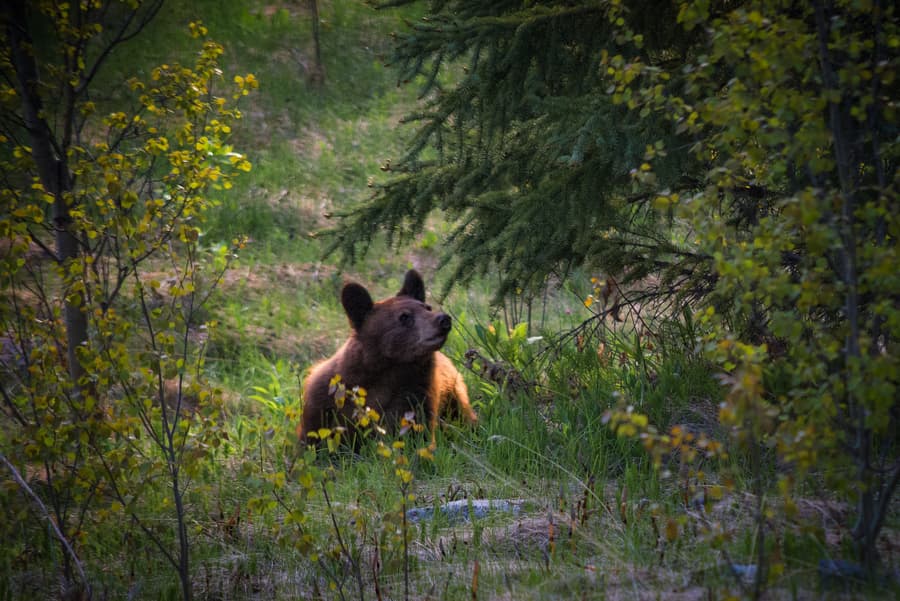 This is the main physical characteristic you can use to tell the difference between grizzly bears and black bears. The grizzly has a marked hump on its shoulders. The hump is made up of muscle mass that powers the front legs of the bear and helps it to dig deeper and more quickly. 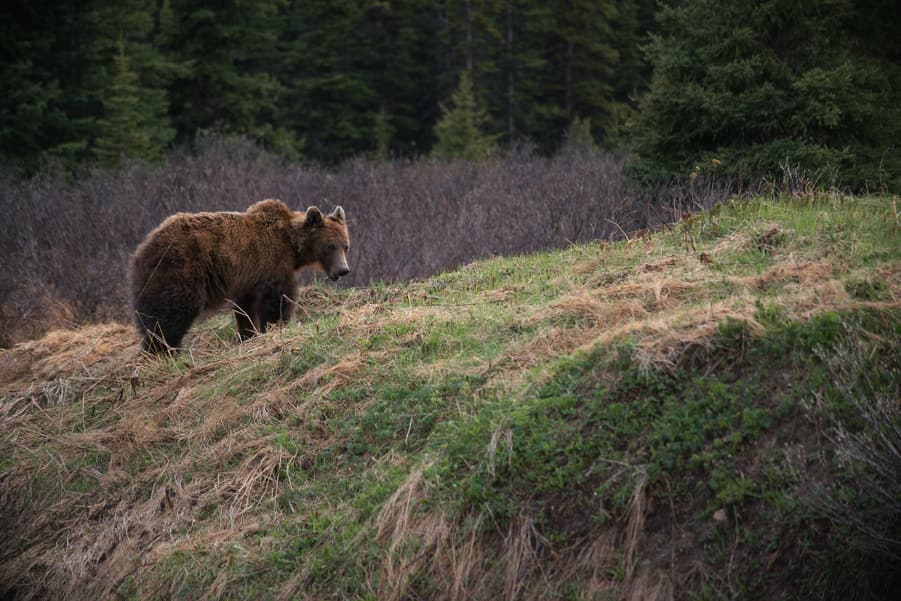 This other feature will help you distinguish black bears from grizzly bears. The ears of the grizzly bear are small and rounded, while those of the black bear are elongated and pointed. 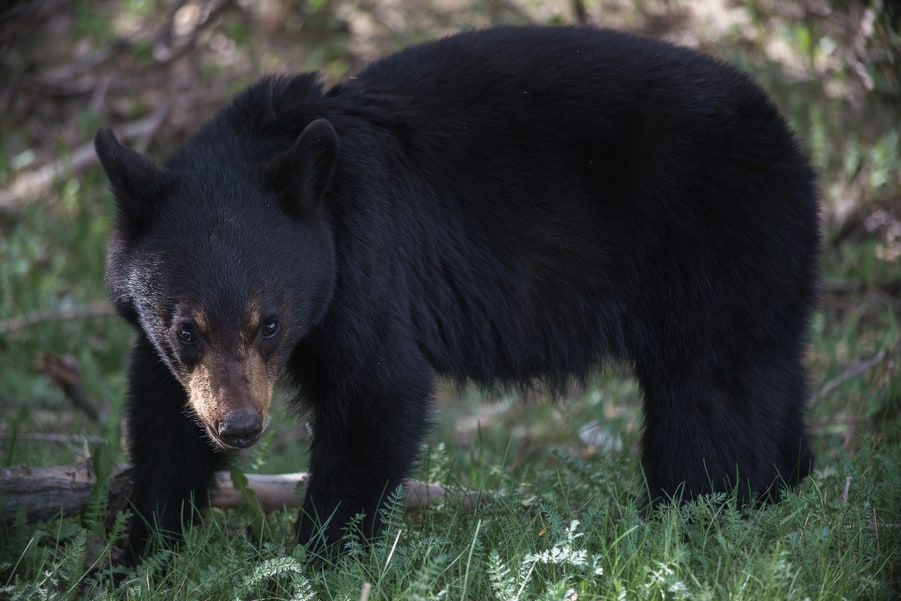 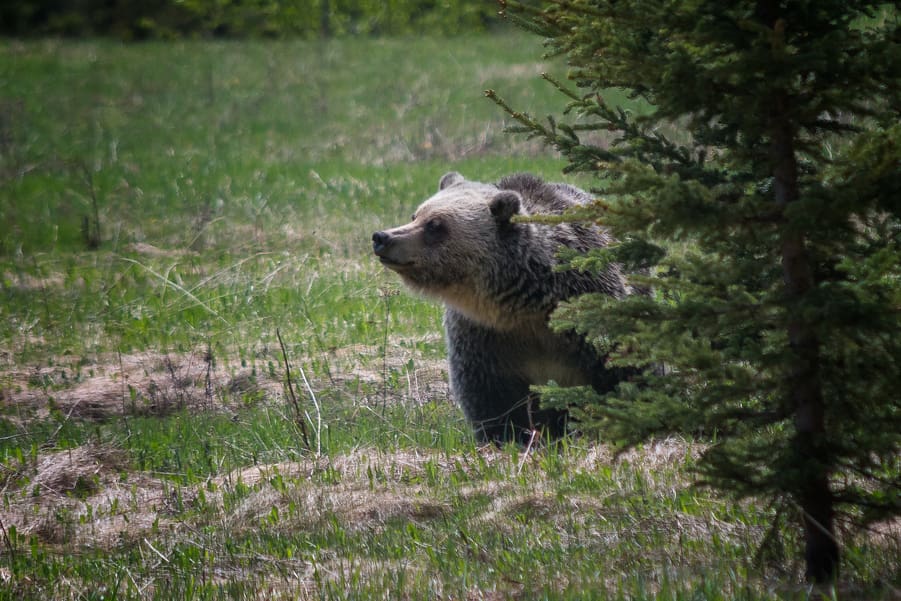 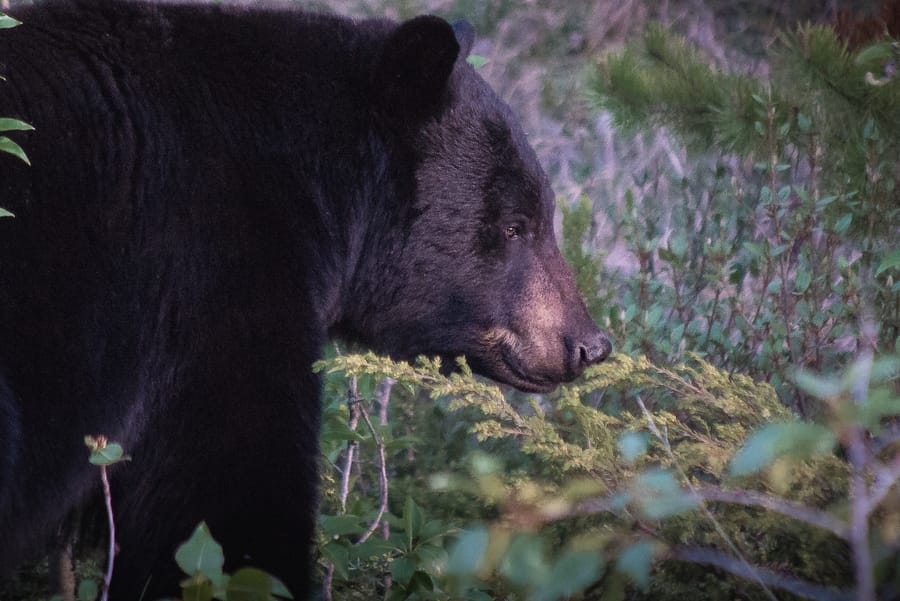 Both grizzly and black bears hibernate during the winter. When they leave their dens, they only return to enter the period of hibernation, so when they are out and about, they are exclusively looking for food. 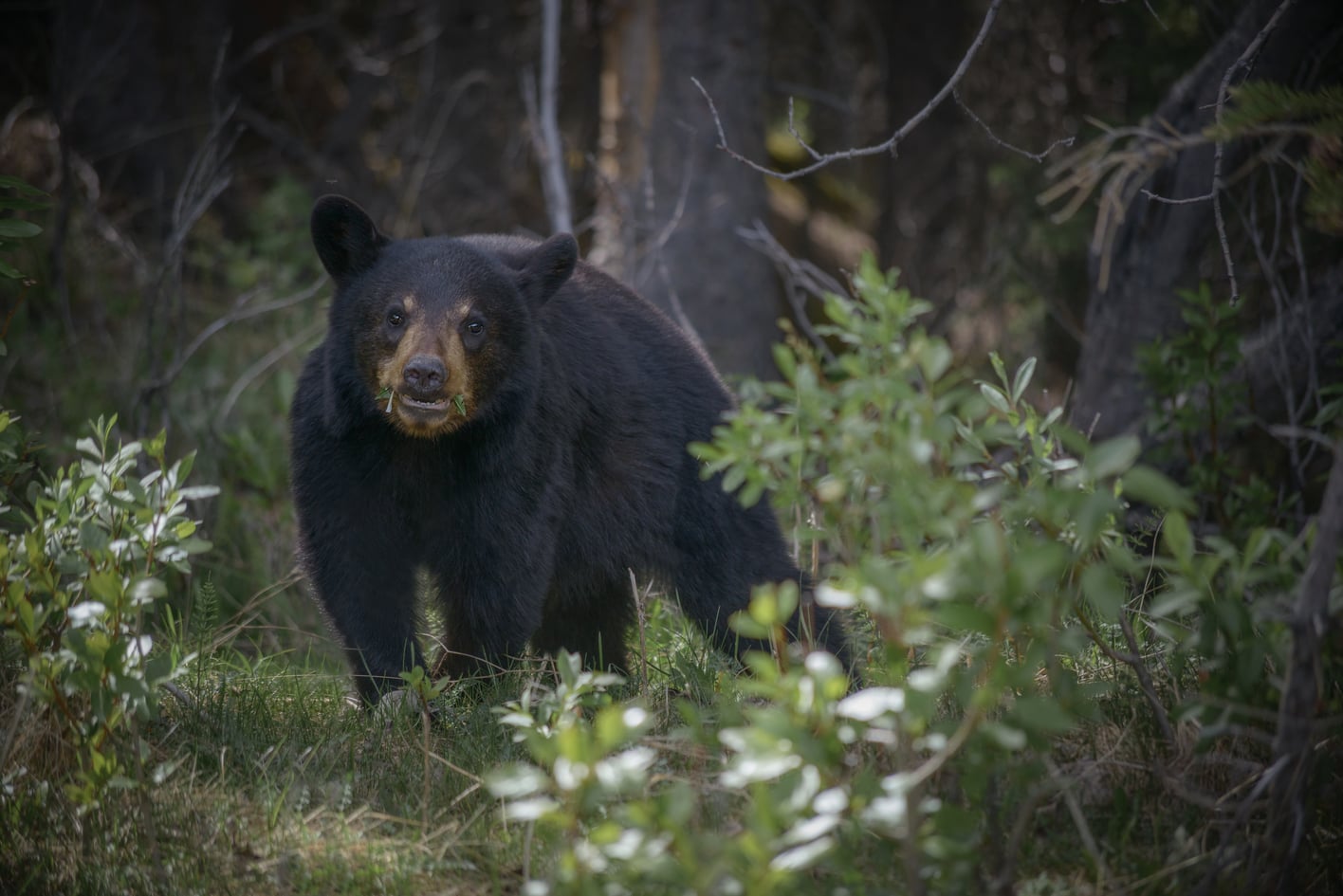 They spend all day long eating to get all the nutrients and fat they need to survive until next spring.

Grizzlies are known to be the most aggressive bears in the world. Their diet is omnivorous, based 90% on vegetables and the rest on fish and meat. They hunt large deer, moose or even black bears.

However, they do not consider the human being part of their diet. They tend to shy away from contact with people. If a grizzly bear attacks a human, it is either because they are taken by surprise or, very rarely, because they are stressed or hungry and can’t find any food. 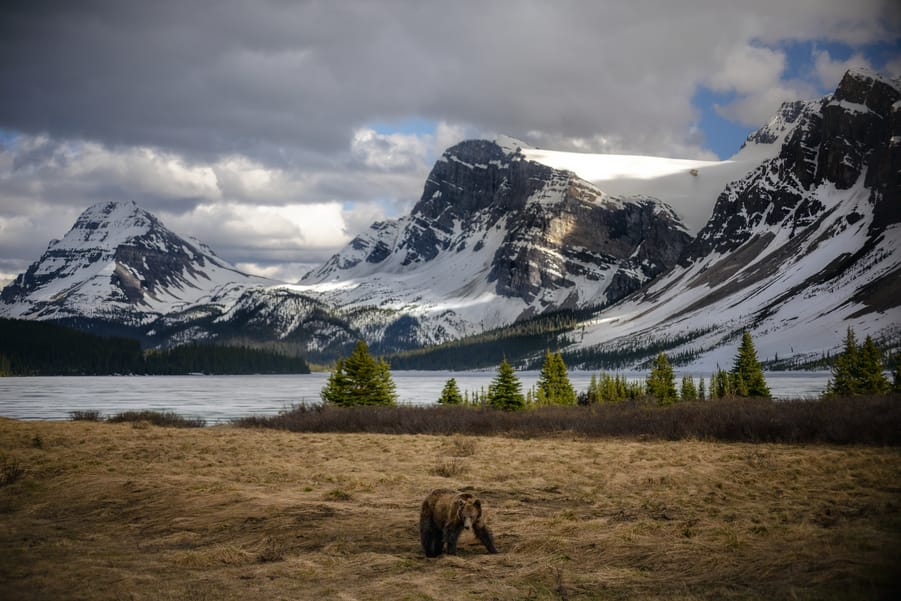 Unfortunately, this situation is happening more and more because the habitat of the grizzly bear is being destroyed by human action. A well-known incident is that of the bears that devoured the ecologist Timothy Treadwell and his girlfriend Amie Huguenard while they were filming a documentary about grizzly bears in Alaska.

Black bears are also omnivores, feeding mainly on vegetables but also consuming meat and fish, which makes up 10% of their diet. They are not great hunters, but, rather, opportunists. They feed on insects, carrion, crabs, honeycomb and anything they can find easily. 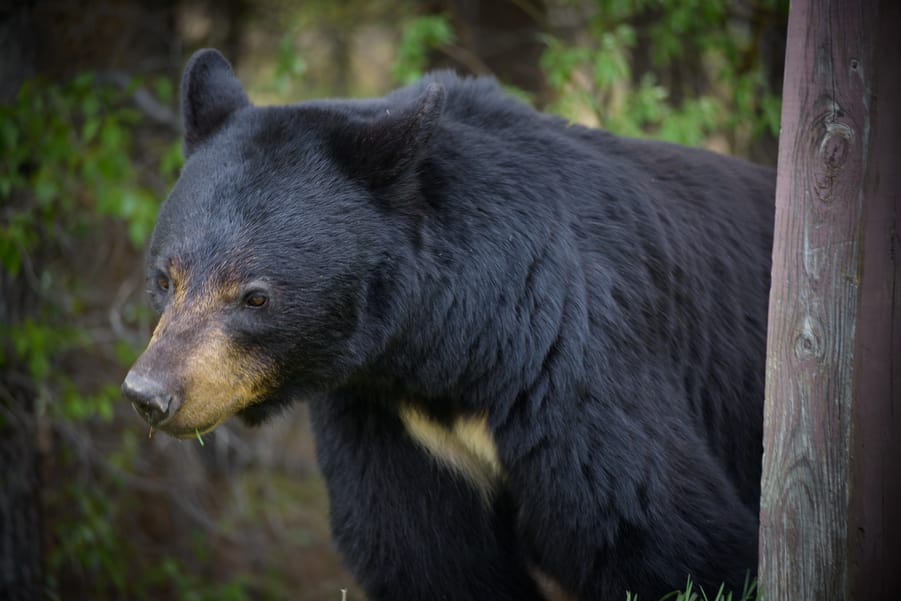 Among the food sources that they can find easily (and should not) are the dumpsters found near their habitats. Unfortunately, black bears are becoming used to humans, so they no longer fear people. Because of this, tricky situations happen when bears get into urban areas in search of food.

These types of attacks happen, especially in parks like Yosemite where measures to prevent bears from having access to human food have come too late.

Although we all like to see wildlife when we travel, there are certain cases where we should avoid encounters with wild animals.

You should be especially cautious when the animal is considered dangerous and you have no form of protection (i.e., being inside a car or behind an electric fence), or if the animal is only a short distance away (in the case of bears, 320 ft. is considered the necessary safe distance). 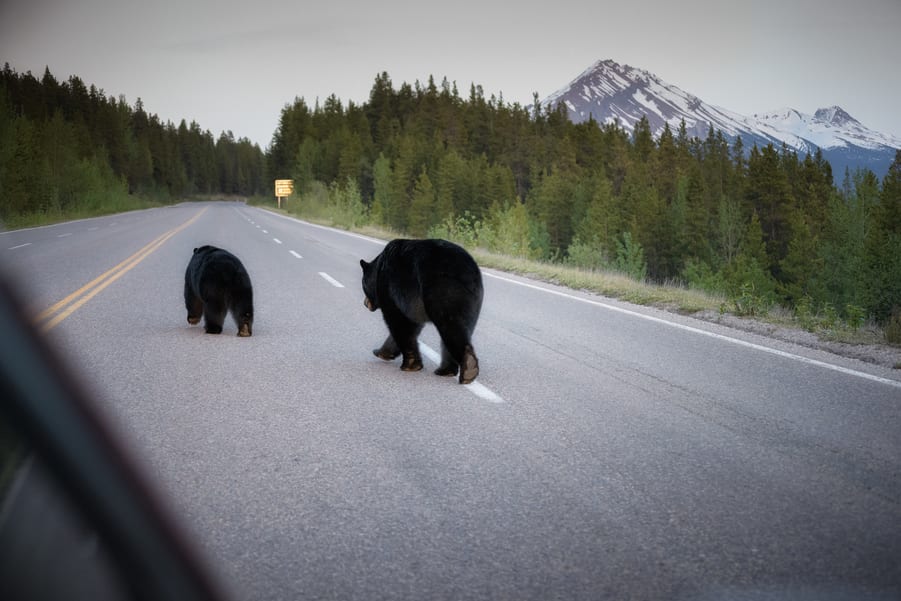 When you’re in nature, follow these tips to avoid a bear encounter that could trigger an attack:

HOW TO BEHAVE DURING A BEAR ENCOUNTER

If you travel to a place inhabited by bears, always take a bear spray with you. The first thing you have to do before an encounter is keep calm and prepare to use the bear spray if needed. 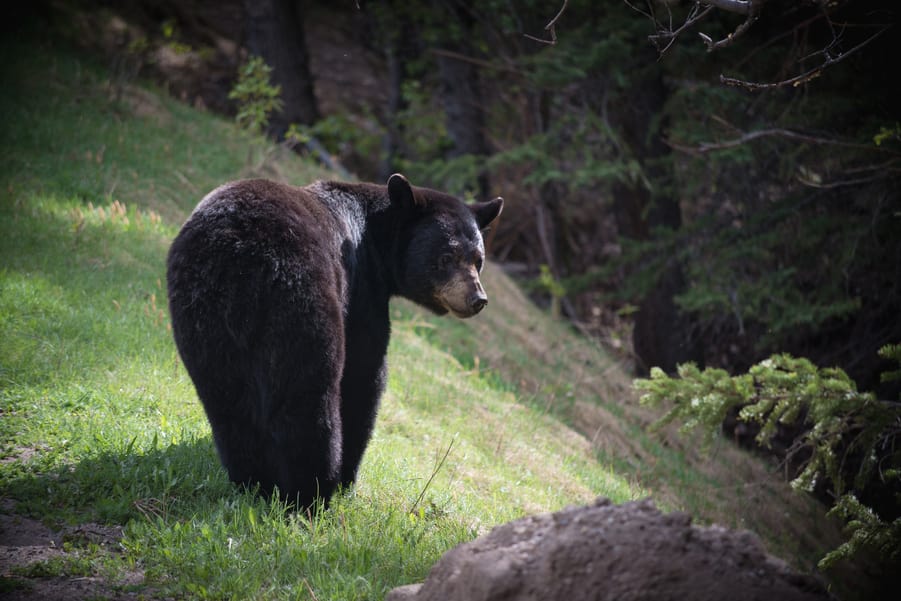 Watch carefully. Does the bear know you’re there?

→ If not, get away immediately without making any noise that may attract its attention or startle it.

→ If he has seen you, in most cases, the bear will be the first to want to leave the area. In some cases, the bear might pretend to charge and turn at the last second. It may also growl, snap its teeth and move its ears back as a sign of threat. In that case, try to follow these next steps:

If you need to follow a path that has been blocked by the encounter with the bear, do it only if you can maintain a safe distance and if not, wait for it to go somewhere far away.

Unfortunately, sometimes, even if you follow the steps above, an attack may take place. In order to survive a bear attack, you must first find out what kind of attack it is because your behavior will be totally different depending on the type of attack.

Defensive attacks are the most common types of attack. They happen when a black bear or a grizzly bear is taken by surprise 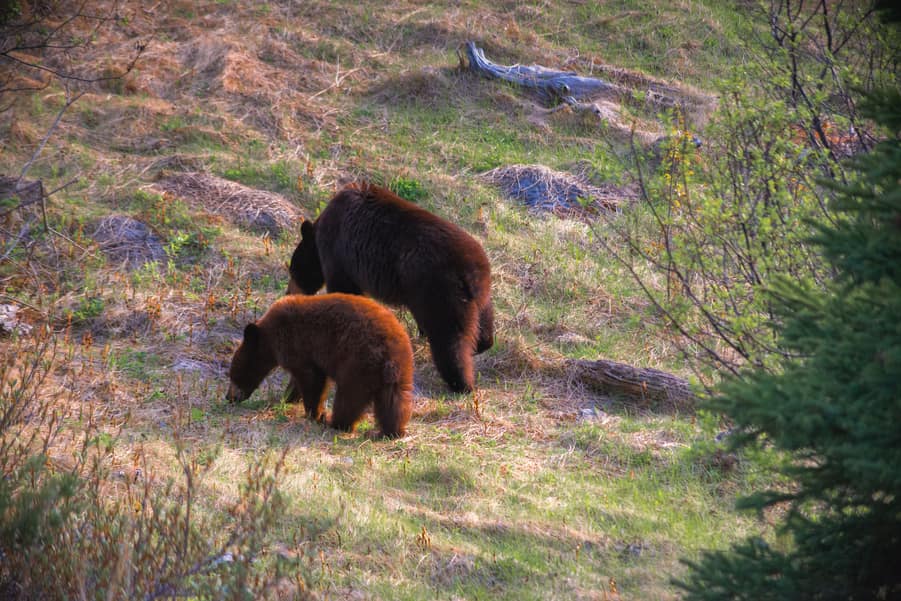 In this case, the bear does not see you as a threat, but, rather, as potential prey. Before this attack, the bear will be curious, with its ears and head raised. 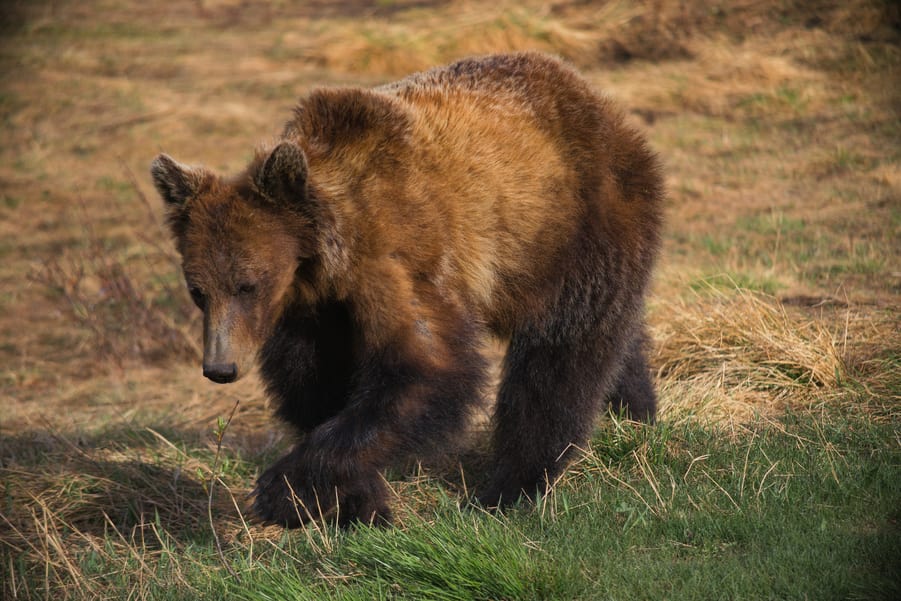 Keep in mind that an attack can go from being defensive to predatory if you don’t act the right way.

HOW TO survive A BEAR ATTACK

Your response should be totally different depending on if you are facing a defensive or predatory attack.

HOW TO survive a DEFENSIVE ATTACK

Follow all the steps described in the section“How to Behave During a Bear Encounter.” If the bear decides to approach after all, use the bear spray. 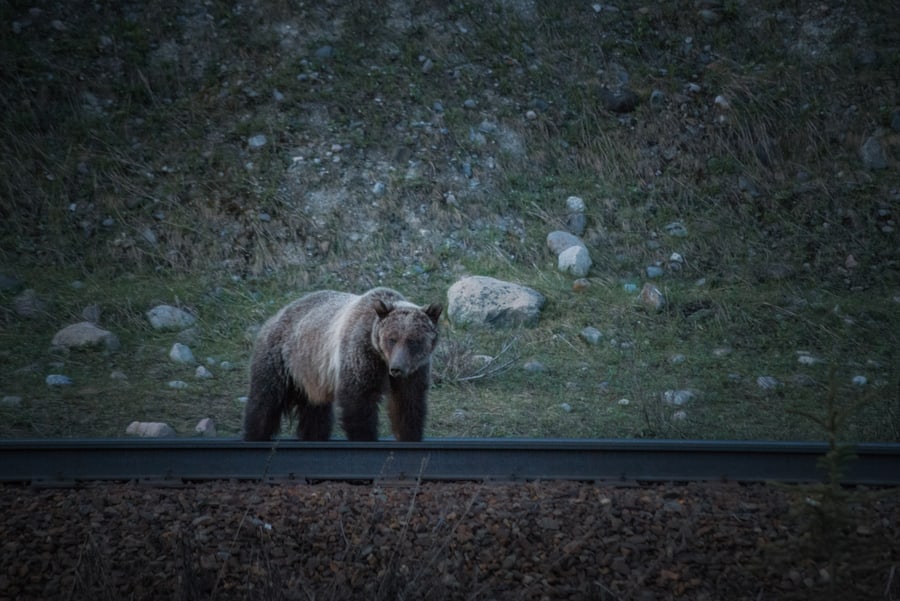 If you don’t have a bear spray and the bear makes physical contact with you, then you need to know what kind of bear is attacking you:

HOW TO SURVIVE A PREDATORY ATTACK

Predatory attacks are very rare, so I don’t believe that you will ever find yourself in this situation or, at least, I hope you won’t. However, if you think you are experiencing a predatory attack, usually by a grizzly bear, then do not play dead.

Use the bear spray and try to take shelter in a building or car.

If you can’t, try to make the bear believe that you aren’t easy prey. Try to intimidate it by screaming and hitting it with rocks or with any other object. It has to think that you are a bigger risk than it is willing to pay to get food.

When it comes to camping in bear country, it is important to follow a series of recommendations. However, in this case, these rules are not universal, since, to a large extent, it depends on where you are. We advise you to ask for specific information on your location at the nearest visitor center. 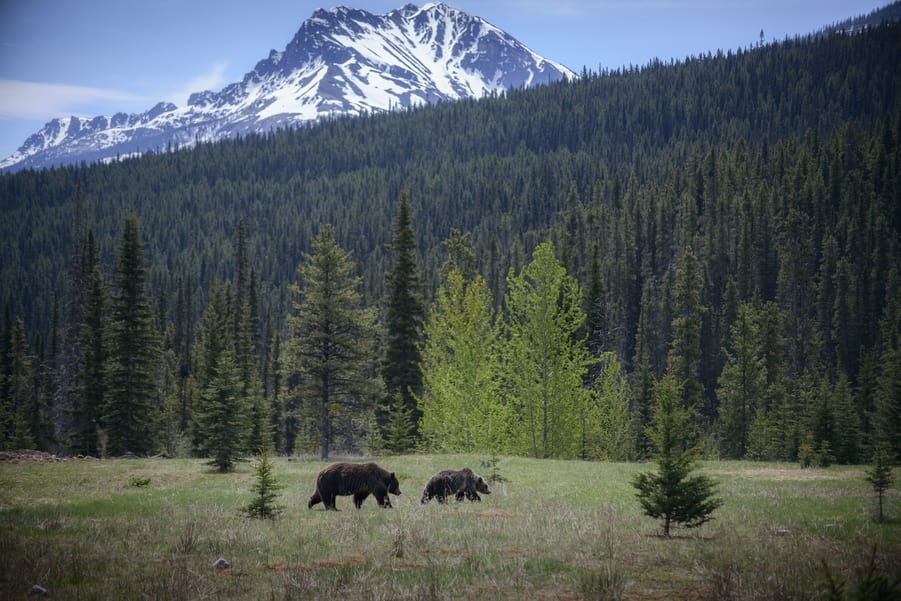 In general, if there hasn’t been a good policy of keeping bears wild, they will have become used to the human presence and, particularly, food and will do personal and material damage in order to continue getting it.

For example, in Yosemite, it is prohibited to store food in cars, because bears break windows to eat it. This is the consequence of having allowed tourists to feed the bears for years. All food and other products with strong odors should be stored in bear-resistant food storage containers that you can find throughout the park.

However, in the Canadian Rockies, food can be stored in the car, because, thanks to the policies that have been carried out for years, bears are not used to human food.

Some general tips that we can give for camping in bear country are:

If you do not have a bear-proof container (United States) or a car (Canada) to store your food and scented products, hang your backpack between two trees at a sufficient height where a bear cannot reach it and at least 300 feet away from the tent.

You should bear in mind that, in both the United States and Canada, bears that get used to human interaction or food are put down, since they return continuously to urban and camping areas, representing a danger to society.

If you do not want this to happen, it is as simple as using all the necessary measures so that no bear can access human food.

If you want to know where to see bears and other animals in the Canadian Rockies, don’t miss this article. 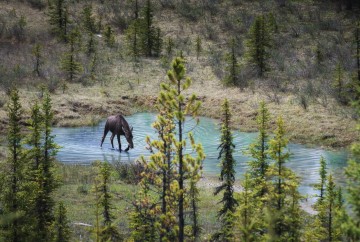 Where to Spot Wildlife in the Canadian Rockies 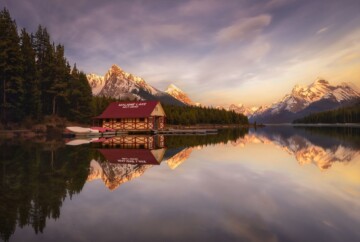 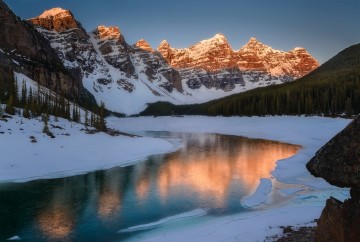 25 Best Things to Do in Banff National Park, Canada + MAP