6 Best Things to Do in Teguise, Lanzarote
×

Teguise is the main town of the municipality of Teguise, and as the largest region in Lanzarote, it’s home to picturesque landscapes, different attractions, and some of the best beaches on the island.

Teguise was the capital of Lanzarote until the second half of the 19th century when power passed over to its neighbor, the city of Arrecife. While it’s no longer the capital, the town of Teguise, Lanzarote is full of history and interesting sites.

We spent one morning of our trip to Lanzarote exploring this lovely village, starting with this free tour (in Spanish). It was a great way to maximize our time and see the most important parts of Teguise before touring its charming colonial streets on our own. As you’ll see in this guide, there are several cool places to check out during your visit to Teguise, so keep reading!

1. Walk through Teguise’s old town, a nice thing to do in Teguise

The Old Town of Teguise is quite small, but it perfectly preserves the traditional architecture of Lanzarote. Getting lost in its narrow streets and maze of whitewashed houses is a wonderful thing to do in Teguise. 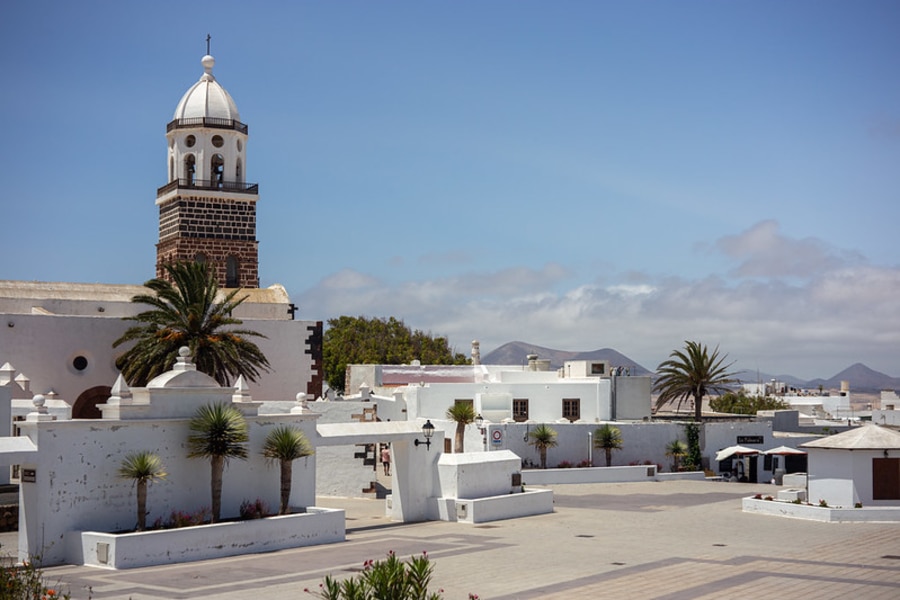 1. Walk through Teguise’s old town, a nice thing to do in Teguise

The Plaza de la Constitución is the historic center of the city and is surrounded by some of the most interesting buildings in Teguise. For example, La Cilla de Diezmos y Primicias was Lanzarote’s first parish, and served as the home of the old tithe collector. In 1986, a project led by Canarian artist César Manrique transformed the parish into a bank. Careful considerations were taken to preserve the building’s interior and façade, so it looks exactly as it did back in the 15th century.

Another ancient architectural jewel of Teguise village is the Palacio del Marqués, which dates back to the 18th century. It’s said that the palace occupied six houses that currently sit behind the Church of Our Lady of Guadalupe. The structure was used by the Lanzarote government from the 15th century until the Barbary pirates nearly destroyed the entire building.

You can see these attractions and the oldest structures in Teguise as you walk along Calle León y Castillo or Calle de las Flores.

2. Iglesia de Nuestra Señora de Guadalupe, another thing to do in Teguise

La Iglesia de Nuestra Señora de Guadalupe (The Church of Our Lady of Guadalupe) is the most important religious building in Teguise, Lanzarote. Inside, you’ll discover the island’s most valuable ecclesiastical heritage. 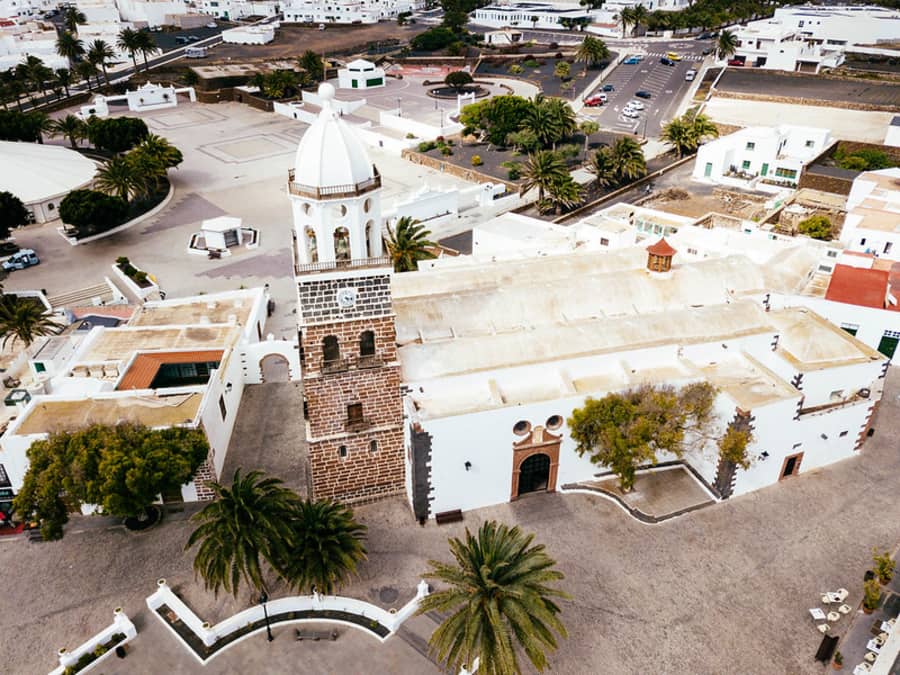 2. Iglesia de Nuestra Señora de Guadalupe, another thing to do in Teguise

The church, which dates back to the 15th century, suffered damage from several fires and accidents, but thanks to donations from the inhabitants of Lanzarote, it was rebuilt over the years. This Teguise landmark was originally built in honor of Santa María de Guadalupe, although it has also served as the royal pantheon for the Princess of Teguise.

Its red stone tower and bell tower stand tall over the small town of Villa Teguise, so it’s something you can’t miss during your visit.

The Casa Museo Palacio Spínola is an 18th-century manor house that was renovated back in the ‘70s as part of a commissioned project by César Manrique. What made us fall in love with this place was its magnificent old façade. 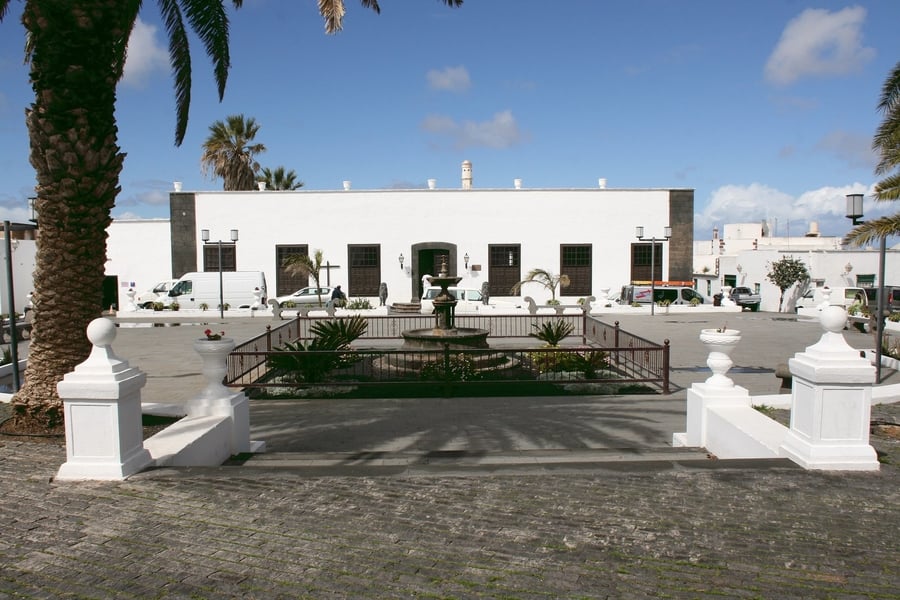 It’s located in the Plaza de la Constitución, right next to the Teguise Tourist Office. Today, it’s the site of the Timple Museum, a cool place to visit in Teguise to learn about Canarian culture and music. The timple is a string instrument native to the Canary Islands that’s similar to the guitar, only with five strings.

You can visit the Timple Museum Monday-Saturday from 9 am to 2 pm, or Sundays and holidays from 9 am to 3 pm. Sometimes, the village of Teguise hosts concerts here, so be sure to check the dates in advance.

4. Browse Teguise Market, a fun thing to do in Teguise

The Teguise Market has become the most famous market in the Canary Islands, thanks to its lively atmosphere and variety of crafts. Many tourists and locals come here to find the perfect handcrafted souvenir to bring back home. 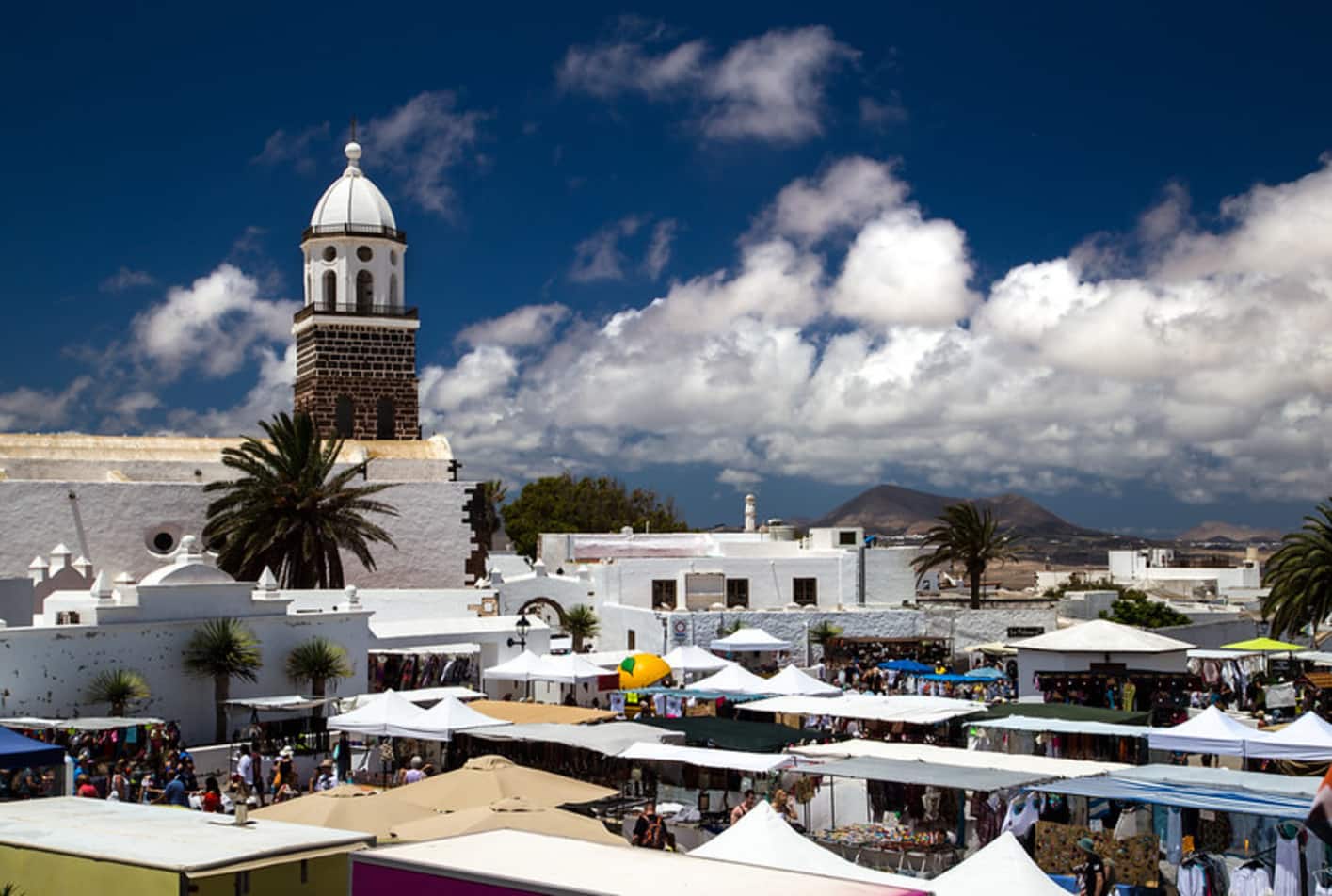 4. Browse Teguise Market, a fun thing to do in Teguise

The market is full of colors and cheerful artisans and vendors, so it’s well worth passing through during your visit to Teguise. It’s open every Sunday from 9 am to 2 pm, and it’s right in the historic center of Teguise’s old town.

Out of all the products you can find here, the ceramic handicrafts are the most popular. I recommend picking one up to commemorate your trip to Lanzarote, such as “Los Novios de El Mojón” (The Bride and Groom of El Majón). These charming lovers are a classic Teguise image dating back to ancient times.

5. Convent of San Francisco, another thing you must do in Teguise, Lanzarote

The Convent of San Francisco was the first convent on Lanzarote, built at the end of the 16th century. Today, it’s the site of the Museum of Religious Art, one of the top places to see in Teguise village. 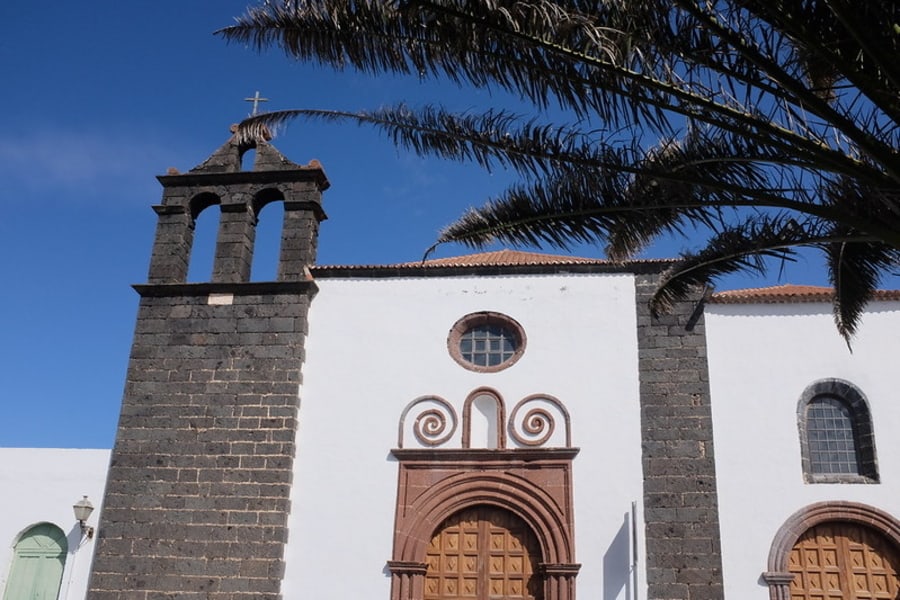 5. Convent of San Francisco, another thing you must do in Teguise, Lanzarote

The museum is open Tuesday-Saturday from 9 am to 4:30 pm, and on Sundays from 10 am to 2 pm. It only costs about USD $2 to get in, and once inside, you can marvel at ancient paintings, sculptures, and other works from the 11th century.

Despite the damage that the structure has suffered from pirate attacks, key pieces of its traditional architecture remain. For example, an exquisite set of Mudejar ceiling tiles is still preserved, so visiting the museum is a wonderful thing to do in Teguise, Lanzarote.

A little over half a mile from Villa Teguise, you’ll find Santa Bárbara Castle, a 15th-century fortress. 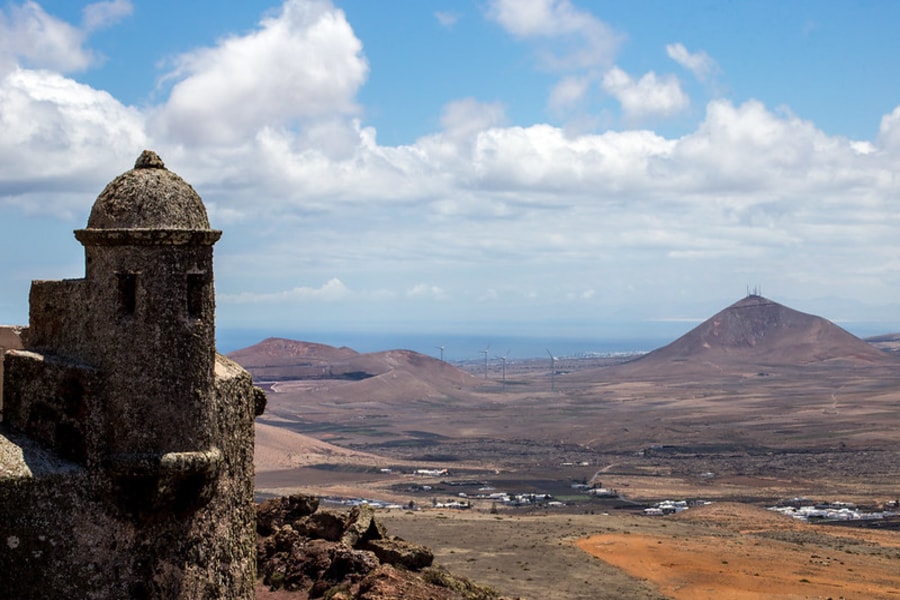 The castle is on the edge of the Guanapay Volcano’s caldera, a strategic location that helped inhabitants watch for pirate attacks. These days, you can enjoy the beautiful lookout point, which boasts panoramic views.

Also, the fortress is now the site of the Museum of Piracy in Teguise, Lanzarote. This is where you can learn the history of the village and pore over old maps and pirate weapons. The attraction is open daily from 10 am to 4 pm, so I recommend checking it out during your trip.

What to see around Teguise and its surroundings

As I mentioned earlier, Teguise is the main town in the municipality of Teguise, which spans a good portion of Lanzarote. Here, you’ll find incredible beaches and other interesting areas, such as the ones below:

Costa Teguise is just ten miles from Villa Teguise, and it’s the most important coastal town in the municipality. There are lots of cool things to do in Costa Teguise, although my favorite is visiting the pristine beaches, which are home to a diverse marine life. La Playa de Las Cucharas may be one of the most popular beaches in Costa Teguise, but there are other stunning ones. 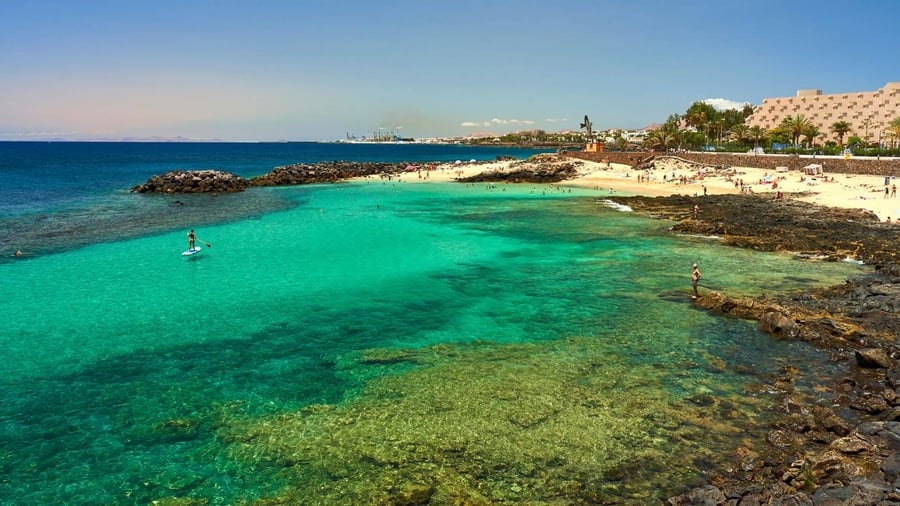 We did our first diving tour here, and it was unbelievable seeing all the colorful fish and sea creatures. If you want to discover the hidden treasures under the sea, I recommend this diving excursion. You can choose to do one or two dives, each 40 minutes.

With over 3.5 miles of sand and a privileged location, Famara Beach is one of the best beaches in Lanzarote. The gorgeous surrounding mountains contrast perfectly with the turquoise waters, making this a beautiful place to go near Teguise, Lanzarote. 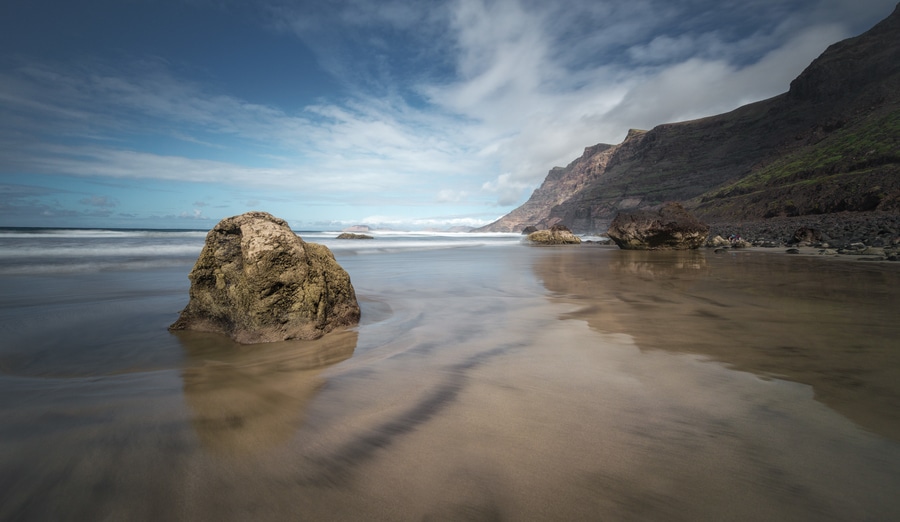 The Cactus Garden is a special place to visit in Teguise. This unique garden was designed by César Manrique and includes cacti from every continent. Here, you can find 4,500 specimens of varying shapes and sizes. 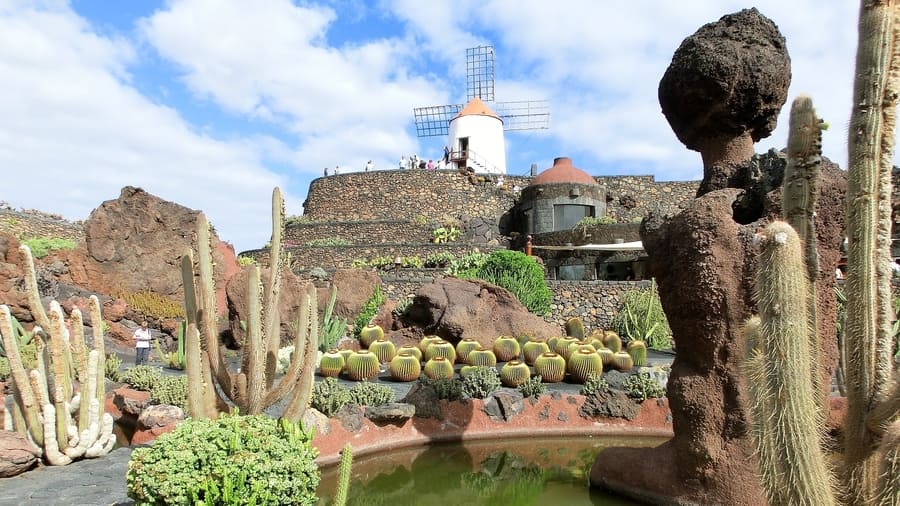 The last few remaining Canarian windmills are here too, making this a lovely space that combines art and nature.

Our visit to Teguise only lasted half a day, but we really wanted to stay at the Hotel Boutique Palacio Ico, one of the best places to stay in Lanzarote. This adults-only accommodation is part of an old, whitewashed villa, right in the heart of Teguise.

If you want an authentic Canarian experience, you won’t find a better option. With its unique rooms, stone walls, and gabled ceilings, this hotel in Teguise has a cozy and charming feel. Plus, it’s just steps from Teguise Market, and about a ten-minute walk from Santa Bárbara Castle. 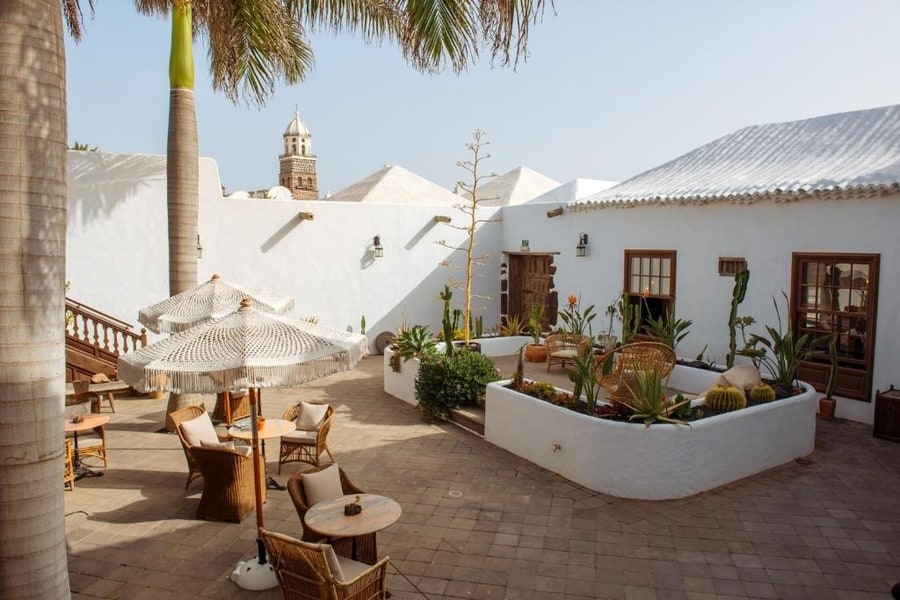 For something different, check out the Eco Dome Experience, a glamping-style accommodation featuring luxurious camping domes with kitchens, air conditioning, and Wi-Fi. It’s on the outskirts of town, and its secluded location allows for more privacy.

Finally, the B&B La Mimosa is a cheaper option for your holiday to Teguise, Lanzarote. While it’s less expensive, it’s no less charming. Located in the center of town, it features simple yet spacious rooms, elegant gardens, and a breezy terrace.

To end this Teguise visitors guide, let me recommend some places to eat. This historic village offers a wide range of restaurants and dishes, so you can enjoy the best of the land and sea. This is also your chance to try authentic Canarian food, which I’m sure you’ll find delicious.

Cantina is an excellent restaurant in Teguise for gourmet Mediterranean and Spanish food. It’s in the center of Teguise’s old town and has a relaxed ambiance. They even serve hamburgers and tapas, so anyone can find something they like here.

The second Teguise restaurant I recommend is Ikarus Restaurant, which serves elaborate international dishes. This modern establishment is also in Teguise’s historic center, and it’s a great option for vegetarians and vegans.

Finally, be sure to stop by Jonnie Bakes, the best café-bakery in Teguise, Lanzarote. They serve yummy breakfasts, snacks, and delicacies that will refuel you during your sightseeing adventures.

How to get to Teguise

To get from Lanzarote Airport to Teguise, you can do what we did and rent a car. This way, you can easily get to your Teguise hotel and other places around the island. If you don’t want to drive, consider booking a private transfer to your hotel.

Of course, you can also take public transport, by taking the bus to Costa Teguise, Playa Blanca, or Puerto del Carmen, then transferring to another bus to Villa Teguise. The buses depart from Terminal 1 and 2 every 20 minutes on weekdays and every hour on weekends.

Finally, an easy way to plan your visit to Teguise, Spain is with a map of Lanzarote. This way, you can easily locate all the points of interest in Teguise and its surroundings. Here is a map of Teguise, Lanzarote, and the attractions, hotels, and restaurants I mentioned.

That’s it from me! I hope you enjoyed this article and found it useful for your visit to Teguise. If you have any questions or you’d like to share your experience, leave me a comment below. Until then, have a great vacation! 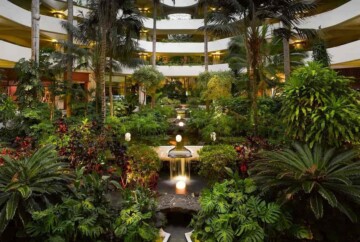 10 Best Things to Do in Costa Teguise, Lanzarote 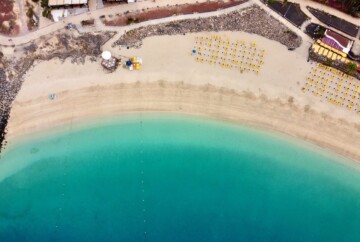 10 Things to Do in Playa Blanca, Lanzarote + MAP 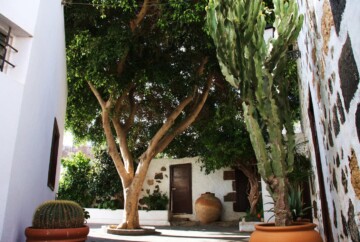 10 Best Things to Do in Arrecife, Lanzarote + MAP