Photographing Northern Lights with a GoPro is totally possible.

I always thought it was impossible to photograph Northern Lights with a GoPro, but during my last trip to Iceland, I was impressed with the results my friend Luis got by shooting the Aurora with a GoPro 7.

Northern Lights shot with a GoPro 7

The quality is even better within the Go Pro 9, but don’t worry if you have any of the previous GoPro models; I’ve seen beautiful images captured with older models like the GoPro 4.

In this guide, I’ll show you how to take pictures of Northern Lights with a GoPro step by step. But before diving into all the steps, if you’re in a hurry to set up your GoPro to capture the Aurora Borealis, I’ll summarize the key points for you.

Here are the best GoPro camera settings for Northern Lights in a nutshell:

Best Steps to photograph Northern Lights with a GoPro

1. Put YOUR GOPRO IN A stable place

Shooting the Aurora with a GoPro requires long exposures, so the most important thing, if you’re aiming to capture a sharp Aurora image, is to make sure your GoPro is static and stable.

For this, I strongly suggest using a tripod for Gopro. That way you’ll be able to set your camera quickly.

Making your camera stable is the first and most important step

If you plan to see the Northern Lights in Iceland or decide to go Aurora chasing in Alaska, these are usually windy places, and wind is stabilization’s worst enemy, especially for light cameras like GoPros.

For this reason, try to set your GoPro on a tripod and adjust it as low to the ground as possible to avoid its being shaken by the wind.

2. Turn off the Wi-fi and the LCD Screen

After a couple of hours photographing Northern Lights with a GoPro, you’ll see how quickly the battery life decreases, especially if you shoot Northern Lights in Canada, Alaska, and other cold places.

To save as much battery as possible, turn off the Wi-Fi and the LCD screen.

3. Turn on the Protune to adjust the best GoPro settings for the northern lights

Once you turn on the Protune, you’ll have access to the best settings for taking Northern Lights shots with the GoPro, like ISO, white balance, Sharpness, etc.

If you don’t edit your GoPro photos, you can use the default GoPro color mode.

On the other hand, if you want to make the most of your GoPro for shooting the Aurora, I suggest using the Protune Flat mode and editing your picture later with any software.

Your image will look flatter on camera, but you’ll capture more detail in the highlights and shadows, plus you’ll have more room for editing your image and get a final better result.

This is a personal choice, but I find the best White balance for Northern Lights on your GoPro to be around 3200 Kelvin.

In any case, you can always tweak your white balance when you edit your Northern Lights GoPro images.

Aurora over Sigoldugljufur canyon shot with a GoPro 7

If you enable the Night Lapse mode when you shoot the Aurora with your GoPro, the camera will keep shooting once you press the shutter button.

You want to do this, first of all, so you can avoid any vibration when you press the shutter and, second, so you can choose which Aurora you like the most out of all the images you capture,

You can also create a Northern Lights time-lapse with your GoPro if you take enough images.

With a continuous interval, your GoPro will keep shooting Aurora images one after another, with no need to press the shutter button.

Use this to avoid any shakiness.

The shutter speed is the most important setting for capturing Northern Lights with a GoPro.

The longer time you set, the more light you’ll capture, but also, the Aurora will look blurrier.

The key is to find a balance while considering the light of the scene (this will depend on the moon phase, external lights, strength of the Aurora, etc).

I’d suggest starting with a 10-20” exposure and adjusting accordingly. The goal is to have a correctly exposed and sharp Aurora image.

Shooting at night, you’ll be forced to raise the ISO to get the correct exposure.

However, there’s always a caveat when you raise the ISO: noise in your photos.

Try not to raise your ISO over 800, and, if you find noise in your images, use the best noise reduction software in the market.

You may have the best Aurora settings on your GoPro, but all of sudden, the Aurora activity increases and the parameters to shoot change completely.

Additionally, the Aurora usually “dances” across the sky, so you need to be ready to change your composition and settings all the time.

Besides the GoPro Aurora settings explained above, don’t forget to adjust:

Last but not least, here are the settings if you plan to film the Northern Lights with a Gopro:

Can you photograph the northern lights with a GoPro?

AAs you can see, photographing Northern Lights with a GoPro is feasible regardless of your GoPro camera model and your skills. You may not obtain images of the same quality as you would get by using one of the best cameras and lenses to photograph Northern Lights on the market, but the GoPro is certainly the best option for travelers who don’t want to carry a heavy camera.

However, make sure you follow all the steps described above and be patient; the Northern Lights are unpredictable and difficult to capture!

Feel free to leave a comment if you’ve got any questions about shooting the Northern Lights with a GoPro! 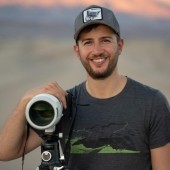 Dan is a professional nature and landscape photographer, photography educator, and co-founder of Capture the Atlas. His base camp is in California, USA, but he spends long periods of time exploring and photographing new locations around the world.

Apart from shooting the Milky Way, the Northern Lights, and any breathtaling landscape, he enjoys leading photo tours to some of the most photogenic places on Earth.

You can find more about Dan here.

– Best Places to see the Aurora –

COVID-19 COVERAGE
ONLY UNTIL JULY 2ND
GET IT HERE!

GET THE ULTIMATE free GUIDE TO
PHOTOGRAPHING The Northern Lights

GET THE ULTIMATE free GUIDE TO
PHOTOGRAPHING The Northern Lights