Check which travel insurance covers COVID-19 (test and treatment abroad). Or buy the Heymondo plan with a 15% discount (only until Nov 28th).

There are many great excursions to Teide, the highest peak in the Canary Islands and all of Spain. So, if you’re traveling to Tenerife and plan to climb Mount Teide, a guided tour is the best option, especially if you don’t want to drive or hike on your own.

Mount Teide is in the center of Tenerife, so you can see it from practically anywhere on the island. When you go to Teide National Park, not only can you do a Teide volcano tour, but you can see the park’s fauna, flora, and unique geological formations. Moreover, the volcano’s peak is 12,190 feet above sea level, so seeing the incredible views from there is one of the top things to do in Tenerife.

To help you plan your adventure, here are the 8 best tours of Teide:

One of the most popular excursions to Teide includes transportation to the base of the cable car and a ride to La Rambleta. While this tour doesn’t go to the volcano’s summit, it’s still quite impressive because La Rambleta is 11,660 feet above sea level.

Depending on where you are staying, you can book this excursion from the north of Tenerife or this one from the south. You’ll travel by bus from the meeting point to Teide National Park, about 7,730 feet above sea level. From there, you’ll board a cable car and ascend to La Rambleta, enjoying lovely views along the way.

Once at La Rambleta, you’ll have an hour to explore the trails and viewpoints in the area. Keep in mind that this Mount Teide tour doesn’t go to the summit since a special permit is required. Also, an hour isn’t enough time to hike the trail to the volcano’s peak.

One of the best excursions to Teide, if you want to reach the summit, is this tour. Along with the special permit to access the summit, the excursion includes a guide and cable car ride.

On this Teide tour, you’ll hike on Trail 10 or Telesforo Bravo, the only route that goes to the summit. The trail is less than half a mile, but it has an elevation gain of over 650 feet, so it’s only recommended for experienced hikers.

The excursion also includes transportation from different parts of Tenerife to the cable car entrance, and a cable car ride is also included. The ride is less than 10 minutes and leads to La Rambleta, where you’ll begin the hike to the summit.

During your hike, you’ll witness the spectacular landscape of Mount Teide, such as the volcanic rock formations. As you get closer to the peak, you’ll smell sulfur in the air, another indication of the volcanic activity in this area. Without a doubt, this is one of the top excursions to Teide, especially if you love hiking and you want to see Spain’s ultimate apex.

Moreover, the tour company handles all the special permit requirements, so you won’t have to worry about it.

3. Tour through Las Cañadas, a cheap excursion to Teide

Within Teide National Park, at the foot of the volcano, you’ll find Las Cañadas, an expansive area, and site of several volcanic eruptions. It is believed that this region was created after the caldera that’s also here, although there is still much debate about that. Regardless, if you want to tour Mount Teide and see this part of the park, I recommend this tour from the north or this one from the south. 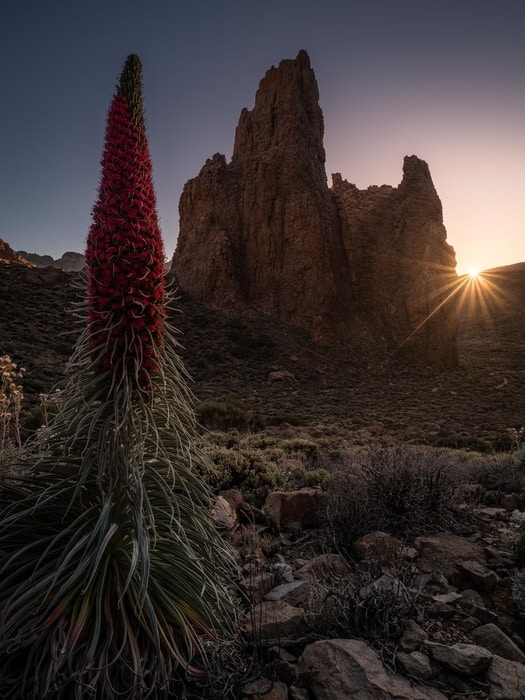 On this excursion in Teide, you’ll be able to witness the desert landscape surrounding the volcano, including rivers of lava and volcanic rock formations like the Roques de García. Throughout the journey, you’ll get lovely panoramic views of Mount Teide.

Depending on the time of year, you may see the tajinaste rojo, or the tower of jewels, a bright red plant that only grows in Teide under special conditions. Also, there isn’t any difference between the tours from the north and the south, as they both cover the same areas. Besides, the price is quite low, so this is a good, cheap Teide volcano tour to consider.

We reached the summit of Mount Teide by taking Trail 7 or the Montaña Blanca route, one of the best hikes in Tenerife. If you love to hike, this is the best way to get to the volcano’s peak. Although we did it on our own, you can book a Teide excursion that does this route, like this tour.

This excursion takes all day and goes from the Cañadas road, where the ascent begins. Part of what makes this Teide tour the best is that you’ll discover unique places along the route. One of these is the Huevos del Teide, two huge black rocks behind the White Mountain. You’ll also pass through the Altavista refuge and the cable car station. The ascent is done on foot, while you’ll descend down the mountain by cable car, and the tickets are included.

The terrain is quite steep since you’re walking on solidified lava, so this is a difficult hike that I don’t recommend for people who aren’t in good physical shape. That said, if you can do it, it’s an incredible Teide day trip that will reward you with amazing panoramic views and landscapes.

On this excursion, you’ll hike the Telesforo Bravo trail, the only one that leads to the summit, and the tour company handles permit access.

Tenerife, specifically El Teide, undergoes a drastic change at night, so doing a Teide night tour can give you a completely new perspective of this otherworldly landscape. If you’re interested in this kind of experience, I highly recommend this tour. 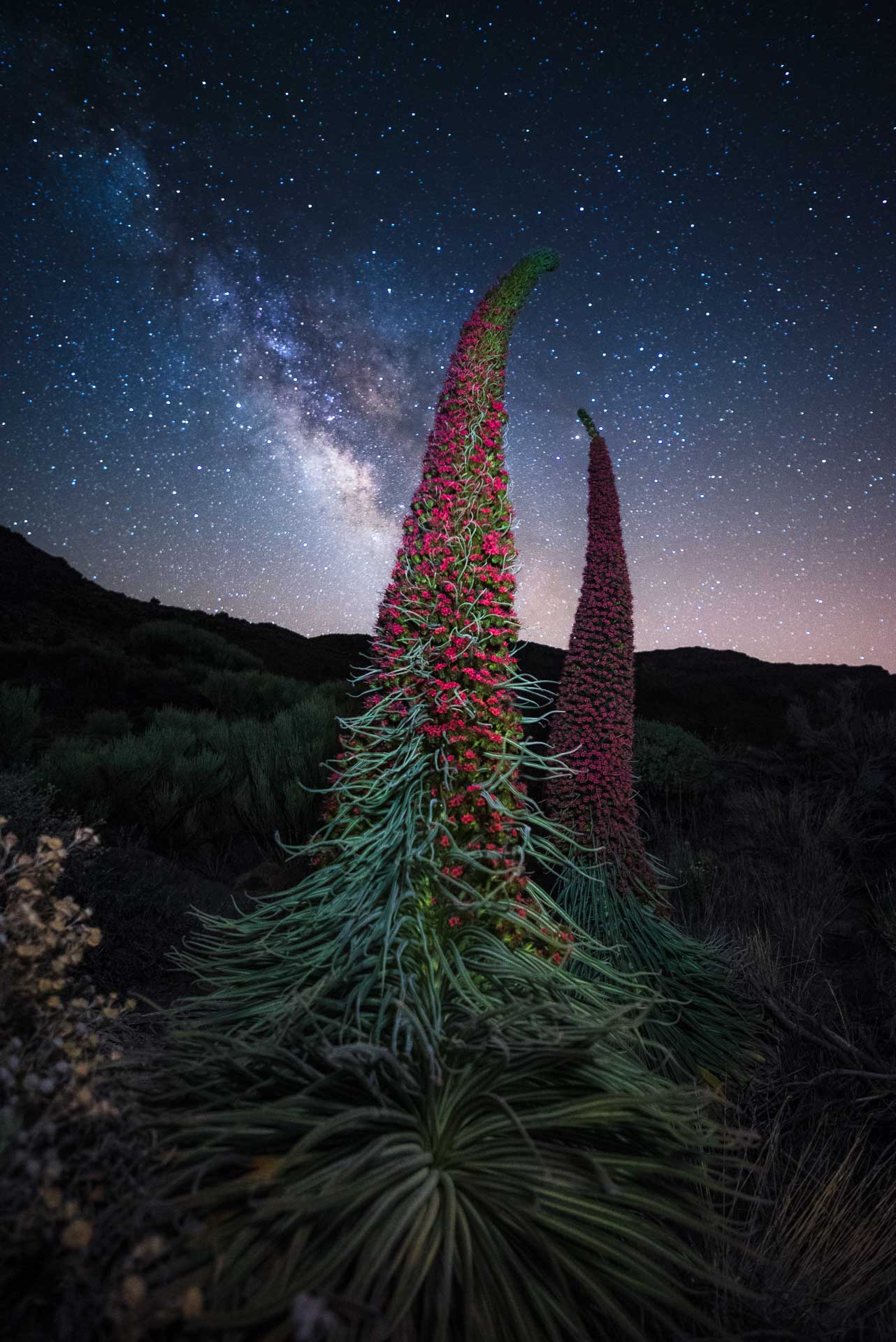 The excursion begins at the Parador de Cañadas del Teide (one of the best paradores in Spain), where you’ll meet your guide and embark on a 3-mile hike under the beautiful starry sky. Moreover, this evening Mount Teide tour will take you to some iconic places, like the Roques de García, all while basking in the glow of the moon and stars.

To make the most of your time, I recommend spending the night at the Parador Las Cañadas del Teide hotel, since you’ll be starting and end the tour there anyway. If it’s already booked, you can find other hotels to stay in Tenerife close to the meeting point.

6. Stargazing tour in Teide, one of the best nighttime excursions in Teide

Tenerife is a designated Starlight Tourist Destination since it has all the perfect conditions to enjoy the night sky. So, if you’re looking for an impressive night tour in Teide, I suggest booking this one.

You’ll experience a Night Sky Star Safari in Teide National Park, where you’ll observe the stars through a telescope. Meanwhile, an expert guide will tell you all about the visible planets, the moon, stars, and much more. Best of all, this Teide excursion includes a glass of cava while you watch the sunset, as well as a traditional Canarian meal.

6. Stargazing tour in Teide, one of the best nighttime excursions in Teide – Efrén Yanes

Another great nighttime excursion to Teide that you can book is this one, which includes stargazing and a visit to Reverón Wineries, located 4,640 feet above sea level.

Regardless of the tour you book, I suggest reading our guide on how to photograph the Milky Way so you can make the most of it!

7. Tour to Mount Teide and Masca, the best day trips to Teide

If you’re looking for excursions to Teide from Puerto de la Cruz in northern Tenerife, one of the best is this tour, which includes a visit to Masca.

You’ll travel in a 4×4 across volcanic formations in the La Orotava valley and Teide National Park. Along the way, a guide will explain the events that caused the volcanic eruptions in this area, and the impact they had on the island’s geology. For example, the village of Garachico was practically buried when Chinyero erupted.

Then, you’ll reach the beautiful town of Masca, located 2,460 feet above sea level. It has one of the best viewpoints in Tenerife, thanks to its popular ravine. Without a doubt, it’s one of the best full day trips to Teide.

If you’re in the southern part of Tenerife, don’t worry because this tour departs from Las Américas and is nearly identical to the other excursion. The only difference is that you’ll start in the south of the island, so you’ll go to Masca and Vilaflor, another charming village.

These are the best tours to Teide, Tenerife if you want to explore the nearby areas and learn more about volcanic activity there.

For those who want a complete tour of Mount Teide, I recommend this tour, as it’s one of the few trips that combine Teide, Masca, Icod, and Garachico.

This tour departs from northern Tenerife, but you can also book this option if you’re in the south. Depending on your starting point, the order of the stops may vary.

One of the places you’ll visit on this Teide tour is the Cañadas del Teide National Park, an area that was created after the volcano erupted. Today, it boasts rivers of lava and characteristic rock formations like the Roques de García. Moreover, from here, you can see Mount Teide in the distance and get a better idea of its full grandeur.

You’ll also stop at Santiago del Teide and Masca, the latter of which is known for its ravine and viewpoints that overlook the region from 2,460 feet above sea level. The excursion’s two other stops are the historical town of Garachico and the municipality of Icod de Los Vinos, where you can see ten Ancient Dragon Tree, considered by many to be a National Monument.

Again, these Mount Teide tours are the perfect choice if you want to take advantage of discovering other points of interest in Tenerife.

If you’re still not sure which excursion to Teide you want to do, here is a comparison of the different prices for each tour:

In addition to the climbing tours on Teide, there are many excursions from Tenerife that will take you to different corners of the island. Of course, to learn more about this stunning island and to make the most of your trip, I recommend reading our guides on things to do in north Tenerife and places to visit in south Tenerife. Regardless of which part of Tenerife you visit, Mount Teide is a must!

Finally, I hope that you feel more confident about booking your excursion to Teide. If you have any questions, leave me a comment below and I’ll help you as much as I can. Have a safe trip!

Don't miss a 15% discount on your HeyMondo travel insurance with

15% OFF your travel insurance with

15% OFF
YOUR TRAVEL INSURANCE
CHECK IT OUT!
x
15% OFF your travel insurance with Covid-19 coverage and certificate
CHECK IT OUT!