There are many apartments in Tenerife where you can enjoy a relaxing holiday or getaway with your partner, family, or friends.

We’ve traveled to this island many times and have tried all kinds of accommodations. So, I can tell you that if you’re looking for tranquility, freedom, and privacy, there is nothing like renting an apartment in Tenerife. It’s our favorite option, especially if the rental is in one of the best areas to stay in Tenerife.

Since there are lots of options to choose from, I’ll make your trip planning a little easier with this guide to the best apartments on Tenerife:

Sunset Bay Club is considered one of the best apartments in Tenerife, both in terms of location and facilities. These rentals are close to Torviscas Beach and Fañabé Beach in Costa Adeje, one of the top places to see in Tenerife. 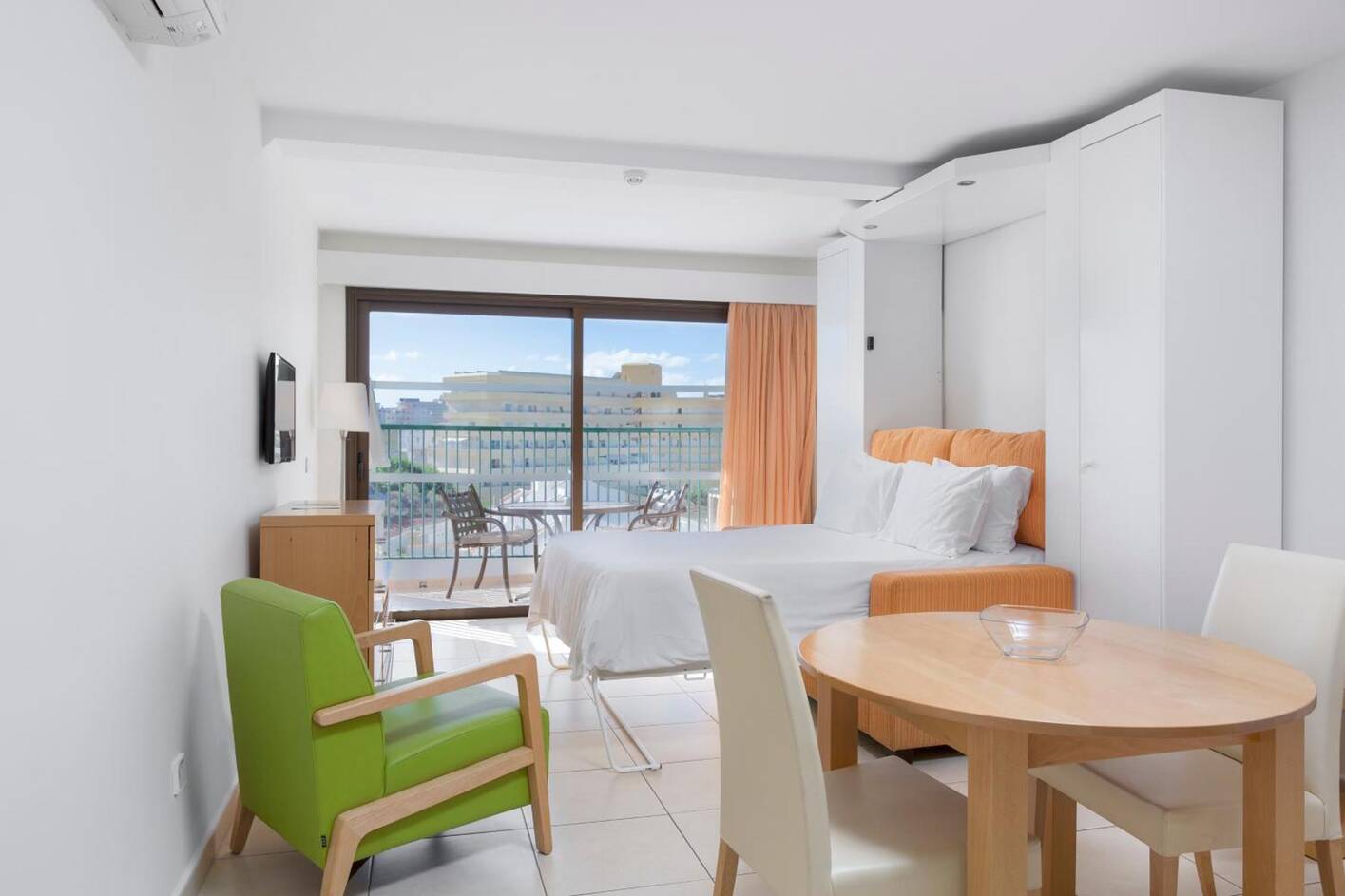 When you stay here, you can enjoy two outdoor pools and a lively entertainment area. In addition, the apartments are very spacious, with capacity for up to eight people, making it the perfect place for families or groups of friends. Each unit has a balcony and a fully equipped kitchen, although if you don’t feel like cooking, there are plenty of bars and restaurants in the surrounding area.

Without a doubt, this is a great apartment to rent in Tenerife, especially if you want to enjoy some of the best beaches in Tenerife and other tourist attractions like Siam Park.

2. Apartamentos RF Bambi, another one of the best apartments in Tenerife

Apartamentos RF Bambi in Puerto de la Cruz are some of the most beautiful apartments in Tenerife north, so I highly recommend them.

Here, you can choose between the Deluxe Apartment or the Deluxe Studio. The apartments accommodate up to four people and include a separate room, while the studios have a two-person capacity. 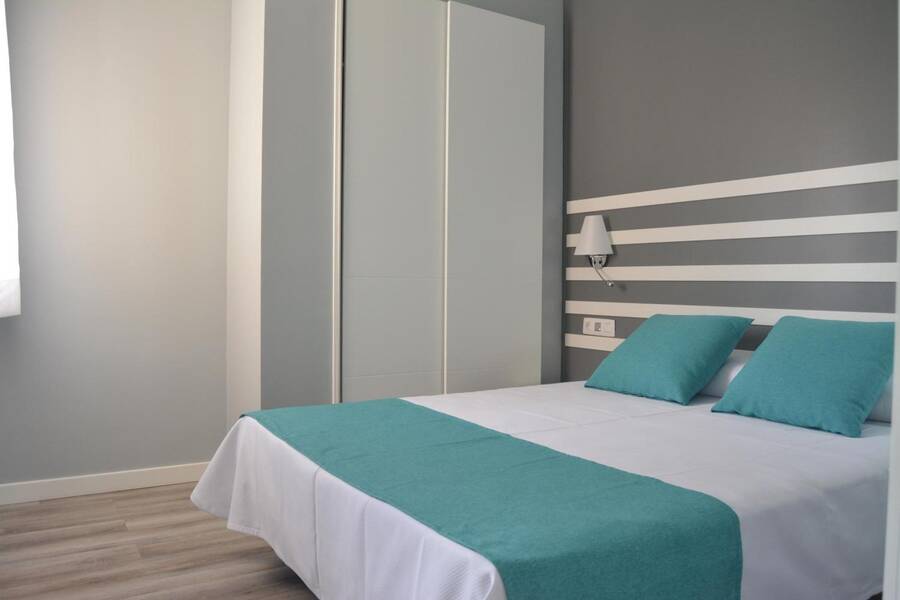 2. Apartamentos RF Bambi, another one of the best apartments in Tenerife

All of these aparthotels in Tenerife have a simple, yet modern style and they’re equipped with a kitchen area and small appliances. Of course, if you don’t want to cook, you can grab breakfast at the on-site restaurant, or check out the cafes and restaurants in the surrounding area.

Finally, your studio or apartment will have a private balcony or terrace, so you can sit back and admire the beautiful city views. In fact, this is one of the best holiday apartments in Tenerife if you want to explore the attractions in Puerto de la Cruz.

Another one of the best Tenerife apartments are the Central Lofts in Santa Cruz de Tenerife.

Here, you can choose from several different types of rentals, including studios and apartments for two to four people. Every apartment has a well-equipped kitchen, so you can hang out, cook your own food, and save money on meals. That said, I highly recommend eating at one of the restaurants here, since as the capital of Tenerife, you can taste authentic Canarian dishes. 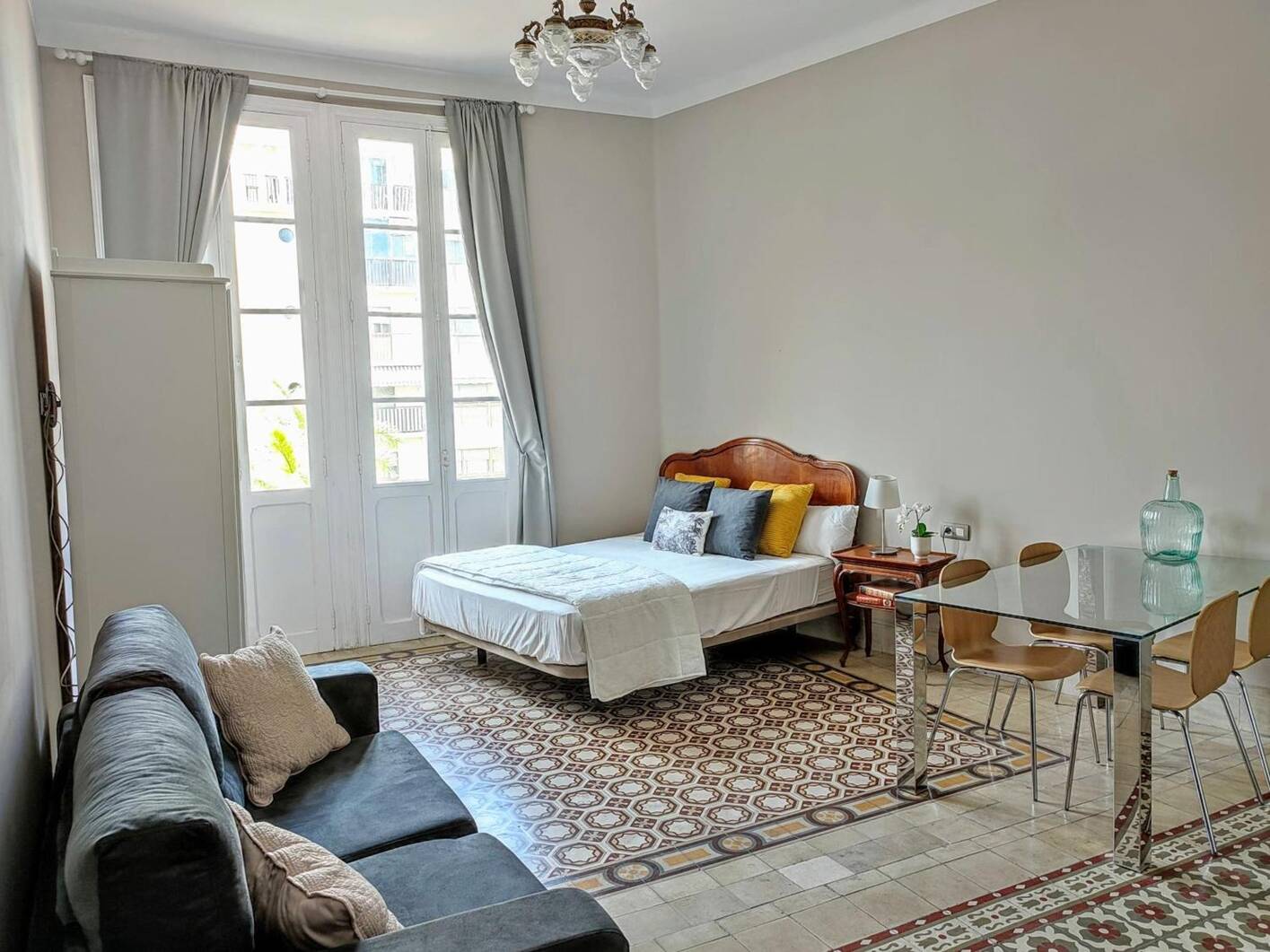 Moreover, despite being one of the cheapest apartments in Tenerife, several of the units have a private balcony or terrace as well as separate rooms. So, if you’re traveling with family or even pets, this is a great place to stay. Plus, you’ll be close to the main attractions in Santa Cruz de Tenerife.

4. Sunset Harbour Club, a beautiful apartment in Tenerife with a pool

Sunset Harbour Club has some of the nicest holiday apartments in Tenerife, and it’s in Costa Adeje, where you’ll find incredible beaches, tropical gardens, and other attractions.

There are studios and apartments here that can accommodate up to six people, so these Tenerife apartments are ideal for families or groups of friends. Every unit is bright and includes a private balcony and a small kitchen. They’re also quite spacious, and depending on which apartment you choose, you’ll have one or two rooms. 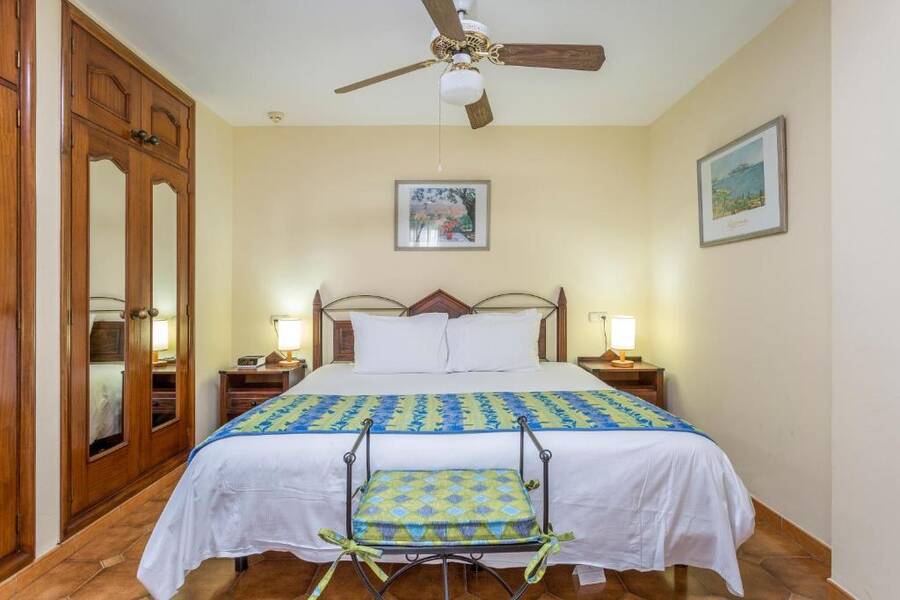 4. Sunset Harbour Club, a beautiful apartment in Tenerife with a pool

As for the facilities, there are two outdoor pools, a game area, and a children’s play area. There is even a wellness area with a massage service, making this one of the best luxury aparthotels in Tenerife.

Over in Los Cristianos, I recommend staying at Beverly Hills Heights, a lovely holiday apartment in Tenerife. Its unbeatable location offers beautiful views of the coast and La Gomera, so it’s well worth it.

These Tenerife apartments are spacious and elegantly decorated, and some of them have a private balcony overlooking the pool or ocean. As for the pool, it’s heated, so this is a great apartment in Tenerife that you can enjoy year-round. 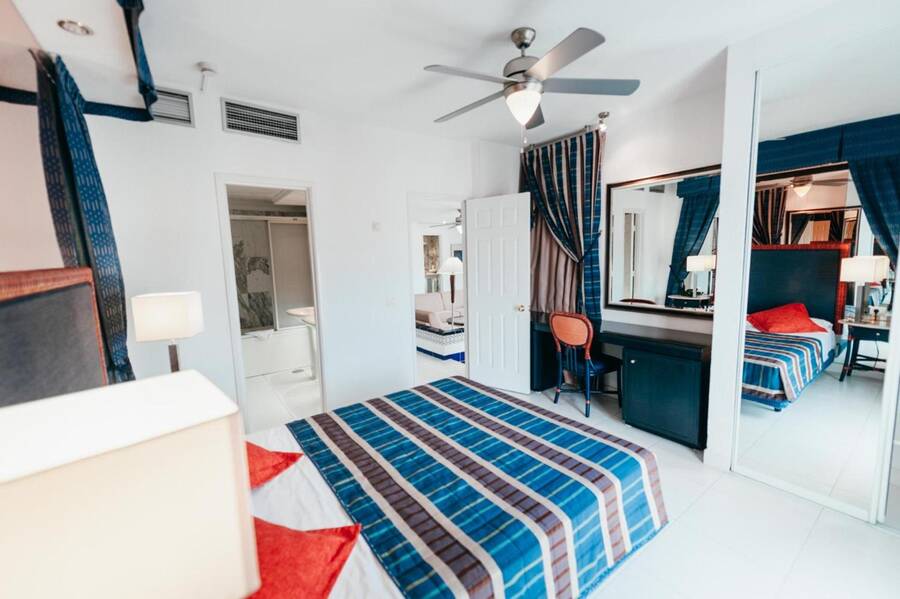 These rentals include a small kitchen so you can cook your meals, although the property also has a restaurant that serves a buffet breakfast every morning. There are also several restaurants in the surrounding area, so this is an overall great option for your vacation.

6. Aparthotel Los Dragos del Sur, one of the best Tenerife apartments to rent for vacation

If you’re looking for an apartment to rent in Tenerife that has all the comforts of a hotel, I recommend Apartamentos Los Dragos del Sur. Here, you’ll have all your needs taken care of, and the property is in Puerto de Santiago, right by the Los Gigantes cliff.

You can choose between different types of apartments with capacity for two to four people, so it’s a great place to stay with family or as a couple. Each accommodation has a private balcony or terrace overlooking the pool or the sea, as well as a well-equipped kitchenette. 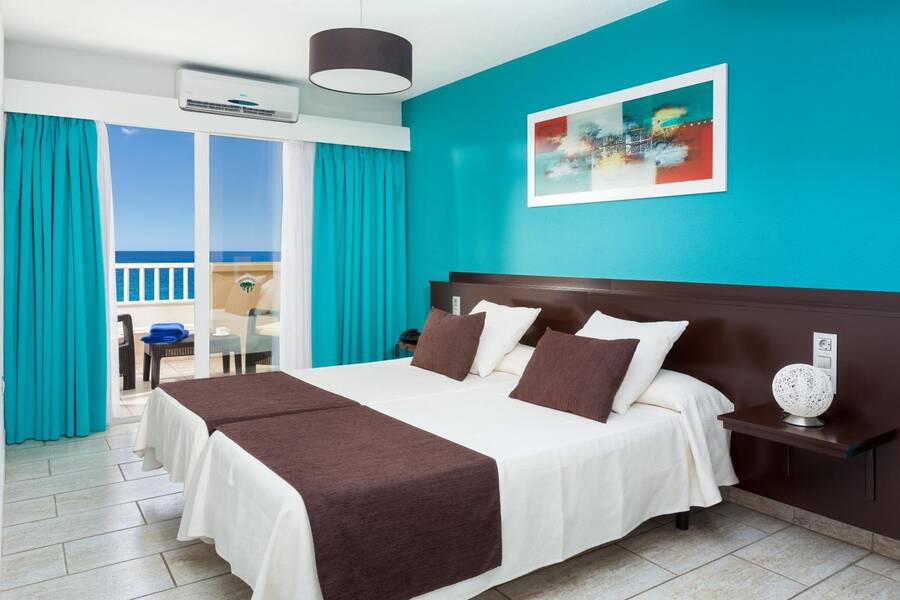 6. Aparthotel Los Dragos del Sur, one of the best Tenerife apartments to rent for vacation

The facilities at this Tenerife apartment include a swimming pool, a gym, and a restaurant that serves a daily breakfast buffet. For all these reasons, this is one of the best apartments in Tenerife south.

We stayed here once when we were exploring the southern part of the island, and we had a wonderful time. The room was perfect, and the facilities didn’t disappoint, so we would definitely rent this apartment on Tenerife again.

Apartamentos Monasterio de San Antonio is a complex of apartments in Tenerife that is super unique since it’s built inside an over 200-year-old monastery. Not only that, but these apartments are close to the famous Drago Milenario, one of the most iconic things to see in Icod de los Vinos.

Each of these rentals is perfectly equipped with a kitchen, small appliances, and modern conveniences to make you feel at home. You can also enjoy beautiful views of the ocean and mountains from your apartment or the property’s interior patio. 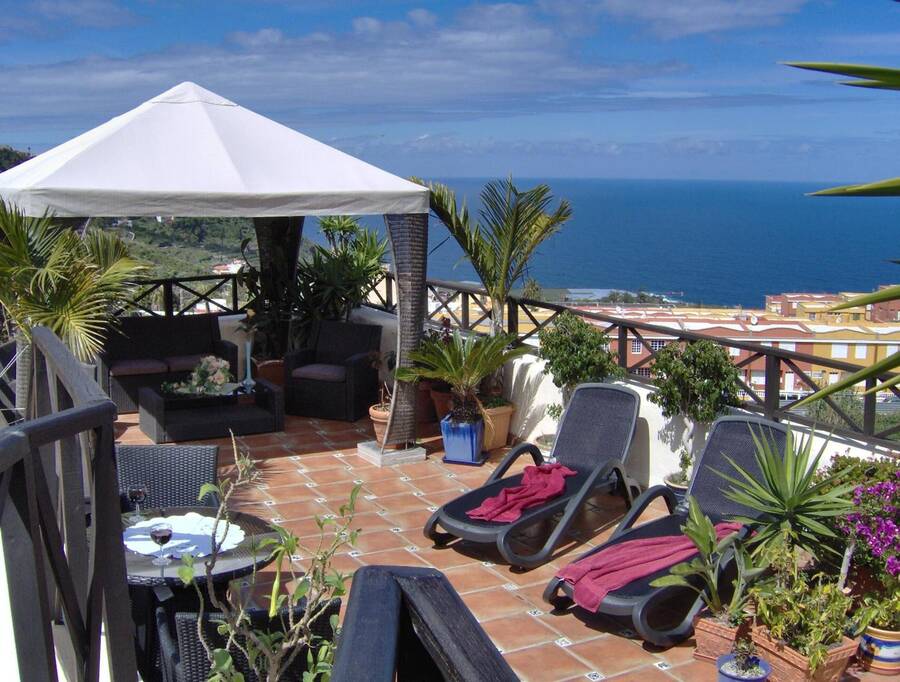 In addition, this accommodation in Tenerife accepts pets, so if you’re traveling with your furry companion, they’ll be more than welcome. Just be aware that the rooms have a maximum capacity of two people.

8. Klayman Diamond Aparthotel, another lovely apartment to rent in Tenerife

The Klayman Diamond Aparthotel is an excellent accommodation in Tenerife that’s also close to Los Gigantes cliff, one of the best places to go whale and dolphin-watching in Tenerife.

All of the units here are elegantly and tastefully decorated, and some of them have a private terrace overlooking the sea. In addition, your Tenerife aparthotel will include a small, well-equipped kitchen, so you can prepare your own meals. 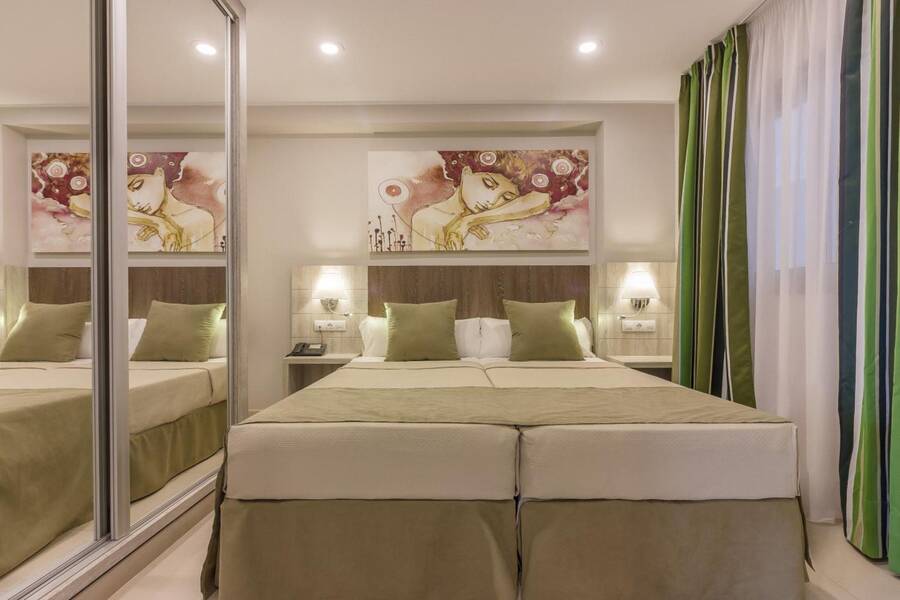 8. Klayman Diamond Aparthotel, another lovely apartment to rent in Tenerife

As for the rest of the property, there is an outdoor pool, a casual café, and a restaurant that serves a delicious buffet breakfast every morning. Even with all these amenities, it’s still one of the cheapest apartments in Tenerife, so it’s a great deal.

The Santa Barbara Golf and Ocean Club is another cheap apartment in Tenerife with an awesome location and lovely facilities. It’s in the southern part of the island, near the beach in San Miguel de Abona.

All of these Tenerife apartments are spacious, with a seating area, a kitchen, a private balcony or terrace, and capacity for up to eight people. Smaller units are also available, so this is a nice place to stay with family or with your partner. 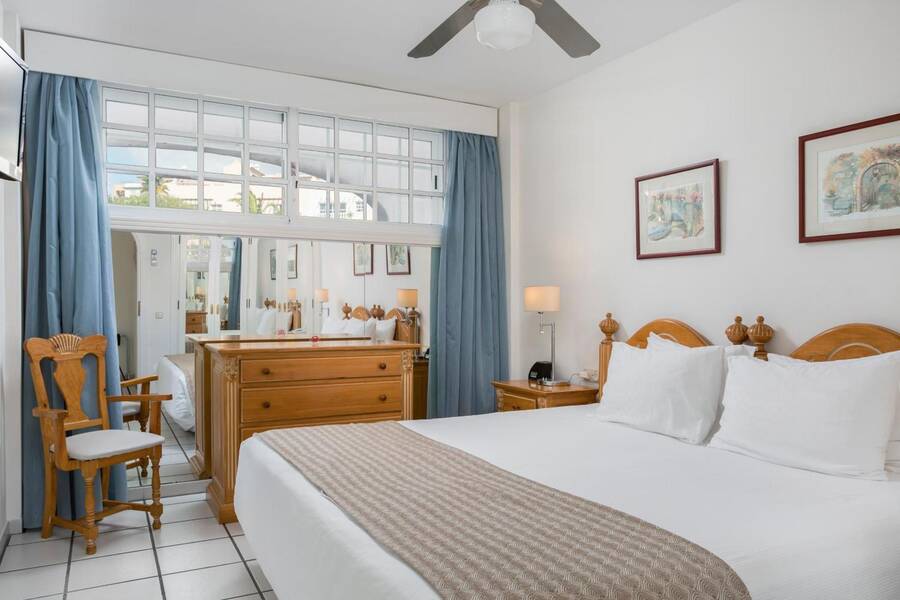 The complex also includes an outdoor pool, a wellness area with a hot tub and sauna, and an entertainment area for guests. Adults can go out dancing at the nightclub, while kids can stay entertained in the children’s area and games room. Without a doubt, this holiday apartment in Tenerife has something for everyone.

Finally, if you’re looking for an apartment in Tenerife with a private pool, the Apartamentos Playazul is one of the best options. Not only does it have a pool, but it’s in the popular area of Playa de Las Américas, so you’ll be near the beach.

These Tenerife apartments are bright and spacious, with well-equipped kitchens and seating areas. Some of the units have a private balcony where you can enjoy incredible ocean views. You can find rentals with capacity for two to seven people, so it’s a good option for couples or groups of friends. 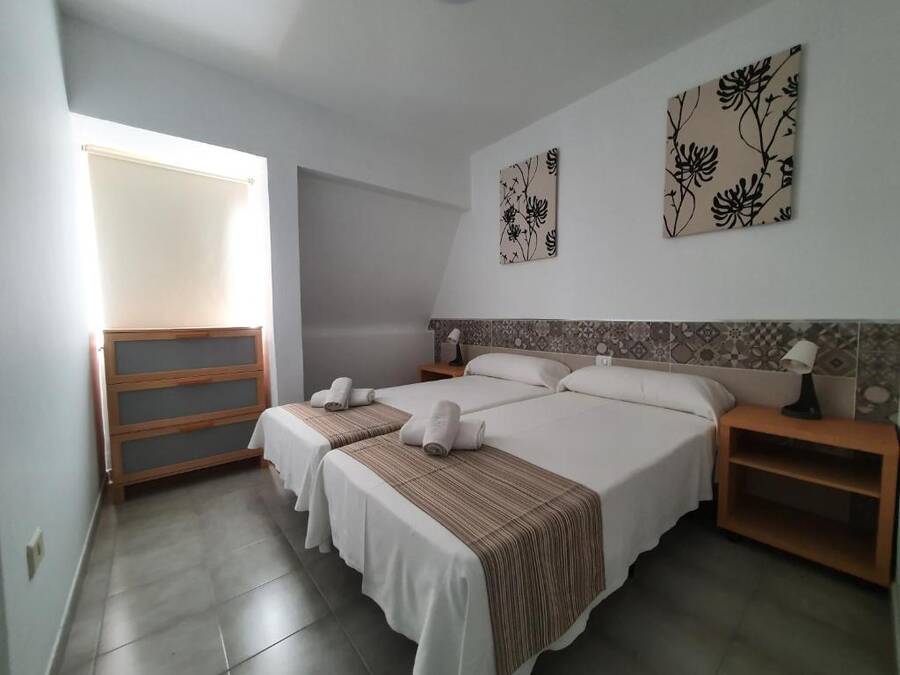 The facilities here include an outdoor pool, a kiddie pool, and a café that serves breakfast and dinner, so you won’t go hungry. Overall, it’s another great apartment to rent in Tenerife for your next vacation.

Now that you know the best apartments in Tenerife, here is a map to help you locate each one and its proximity to popular attractions on the island.

That’s it from me, but if you have any questions or you’d like to share your experience at one of these Tenerife apartments, leave me a comment below. I look forward to hearing from you! Until then, have a great trip! 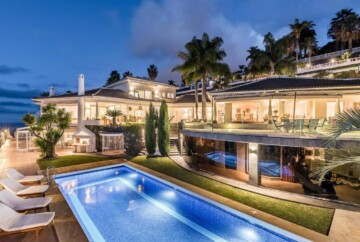 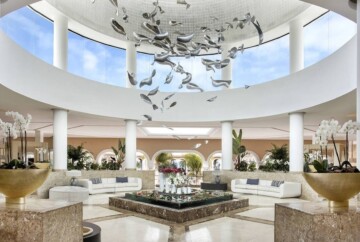 10 Best Hotels in Tenerife, Spain for a Luxury Vacation 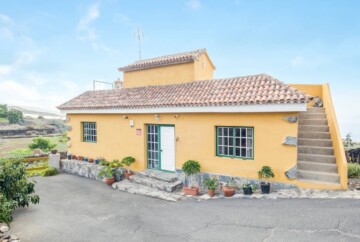